Are federal law enforcement agencies accurately reporting how much they spend on firearms, ammunition, and tactical equipment?

We found that federal agencies’ internal data on these purchases did not always match data that were publicly available on USASpending.gov. For example, ICE told us that it spent 8 times more on firearms than the amount we calculated using data from the website. This was partly because other agencies used ICE contracts to buy firearms, but weren’t properly identified in ICE's website data.

We recommended that ICE update its contracting process to include the names of these agencies. 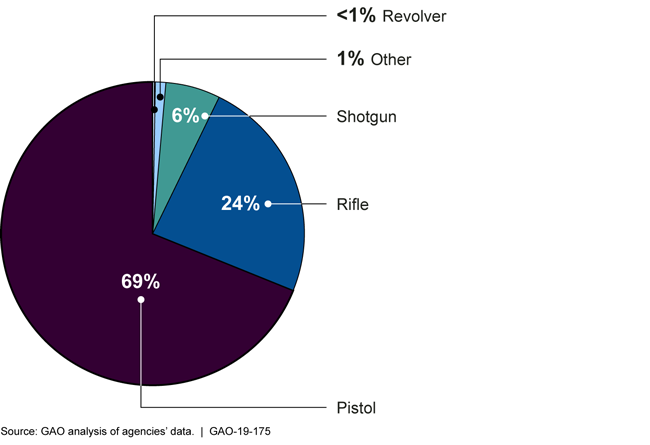 The 20 federal law enforcement agencies in GAO's review reported spending at least $38.8 million on firearms, $325.9 million on ammunition, and $1.14 billion on tactical equipment—at least $1.5 billion in total—from fiscal years 2010 through 2017, based on data agencies provided to GAO.

The internal agency data on firearms and ammunition purchases for the Bureau of Indian Affairs, U.S. Forest Service, and U.S. Immigration and Customs Enforcement (ICE) did not always match data that were publicly available on USASpending.gov—a government source for federal contract data. In particular, the dollar value of firearms purchases by ICE in USASpending.gov was approximately 8 times greater than the value of the purchases reported by ICE to GAO. Some differences result from other agencies using ICE contracts to make firearms and ammunition purchases, and ICE not properly identifying the funding agency for those purchases in the system that supplies data to USASpending.gov. Because ICE does not accurately report the agency that funded these purchases, the public does not have accurate information on how much ICE—and the agencies that make purchases using ICE contracts—have spent on firearms and ammunition. This decreases accountability and transparency of federal purchases, which is in conflict with the intended purpose of this system.

Department of Health and Human Services (HHS), the Environmental Protection Agency (EPA), and the Internal Revenue Service (IRS) have inventory controls for tracking, verifying, and securing federal law enforcement officers' (FLEOs) firearms. GAO observed these agencies' law enforcement components and found them to be generally following their inventory and security policies at selected locations. In instances where agencies were not in compliance with their policies, the agencies made corrections during the course of GAO's review. Each component has a process whereby at least once yearly officials review the firearms inventory to ensure that firearms match with records in the office's inventory system. The figure below illustrates a general process that all components GAO reviewed follow to verify their firearms inventory. Ammunition and tactical equipment inventory controls varied because agencies generally did not consider these items to be as sensitive as firearms. Examples of these controls include security for, and limited access to, equipment that might be vulnerable to risk of loss or unauthorized use, such as silencers or pyrotechnics.

This report examines, among other objectives (1) firearms, ammunition, and selected tactical equipment spending by federal agencies with 250 or more FLEOs from fiscal years 2010 through 2017; (2) the extent to which select agencies accurately reported purchases of firearms and ammunition in publicly-available data; and (3) inventory controls in place at HHS, EPA, and IRS.

GAO obtained available data on purchases from 20 agencies and from USASpending.gov, and reviewed inventory information and controls within HHS, EPA, and IRS. GAO also conducted site visits to HHS, EPA, and IRS offices to observe inventory controls, selected based on data discrepancies or reports of loss or theft, among other factors.

This is a public version of a sensitive report that GAO issued in October 2018. Information that HHS, IRS, and the Transportation Security Administration deemed sensitive has been omitted.

GAO recommends that the Director of ICE update ICE's contracting process to provide the name of the agency funding the purchase of firearms and ammunition to improve the accuracy of publicly available data. ICE concurred with the recommendation.