Millions of households rely on the $64 billion Supplemental Nutrition Assistance Program, formerly known as food stamps, to buy food. But some stores are defrauding the program by "selling" cash instead of food. For example, a store might give a person $50 in exchange for $100 in benefits—then pocket the difference.

How widespread is this "retailer trafficking"? The Food and Nutrition Service (FNS) reports that $1 billion in benefits are trafficked annually. However, the real extent is uncertain and could be anywhere from $960 million to $4.7 billion.

We recommended ways to improve how FNS measures and addresses trafficking. 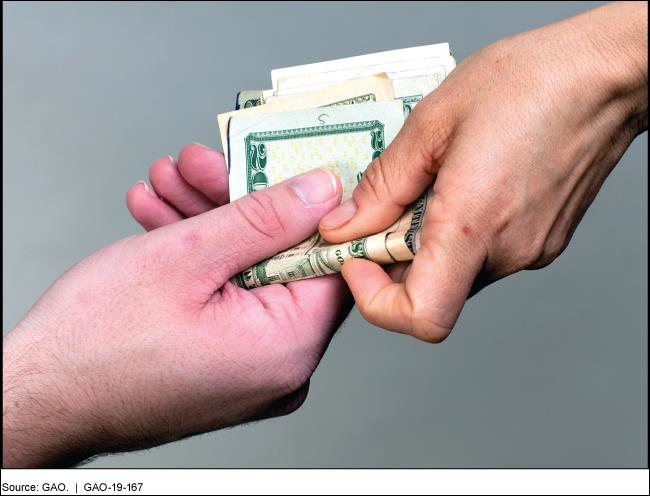 Illustration of a retailer exchanging SNAP benefits for cash.

The U.S. Department of Agriculture (USDA) Food and Nutrition Service's (FNS) estimates of retailer trafficking—when a retailer exchanges Supplemental Nutrition Assistance Program (SNAP) benefits for cash instead of food—have limitations, though they suggest trafficking has increased in recent years, to $1 billion each year from 2012 to 2014. One key limitation of the estimates is that FNS has not evaluated the accuracy of its assumption about the percentage of SNAP benefits trafficked. FNS assumes that, among stores that trafficked, 90 percent of the benefits redeemed in small stores, and 40 percent in large stores, were trafficked. A former FNS official stated that this assumption is based on discussions with investigators in the 1990s when FNS first developed its approach to estimate trafficking, and that they have not since evaluated it for accuracy. However, there are options available for evaluating this assumption, such as reviewing SNAP transaction data from stores that are known to have trafficked. Statistical standards for federal agencies indicate that assumptions should be reviewed for accuracy and validated using available, independent information sources. By not evaluating this key assumption, FNS's commonly cited estimates of SNAP fraud are potentially inaccurate.

FNS has generally taken steps to address retailer trafficking that align with leading fraud risk management practices, but the agency has not pursued additional actions to prevent and respond to trafficking. For example:

Although FNS assigns a risk level to each store when it applies to participate in SNAP, it is not currently using this information to target its reauthorization activities to stores of greatest risk. During reauthorization, FNS reviews previously approved stores for continued compliance with program requirements. FNS currently reauthorizes all stores on the same 5-year cycle, regardless of risk, although its policy states that it will reauthorize certain high-risk stores annually. FNS officials planned to reauthorize a sample of high-risk stores each year, but said they did not follow through with those plans. Officials also stated that they did not document an analysis of the benefits and costs of this practice, which would be consistent with leading fraud risk management practices. As a result, FNS may be missing an opportunity to provide early oversight of risky stores and prevent trafficking.

The Food, Conservation, and Energy Act of 2008 gave USDA the authority to strengthen penalties for retailers found to have trafficked, but as of November 2018, FNS had not implemented this authority. FNS proposed a related rule change in 2012 and indicated the change was necessary to deter retailers from committing program violations, but the rule was not finalized. By failing to take timely action to strengthen penalties, FNS has not taken full advantage of an important tool for deterring trafficking.

SNAP is the largest federally funded nutrition assistance program, providing about $64 billion in benefits to over 20 million households in fiscal year 2017. FNS oversees SNAP at the federal level and is responsible for authorizing and overseeing retailers. While most benefits are used as intended, some retailers have engaged in trafficking, which represents fraud and diverts federal funds from their intended use. GAO was asked to review FNS's efforts to address SNAP retailer trafficking since GAO's last report in 2006.

This report examines (1) what is known about the extent of SNAP retailer trafficking, and (2) the extent to which FNS has taken steps intended to improve how it prevents, detects, and responds to retailer trafficking. GAO reviewed relevant federal laws and regulations, FNS policies, and studies related to retailer trafficking; assessed FNS's use of statistical standards for federal agencies and selected leading practices in GAO's Fraud Risk Framework ; and interviewed FNS and USDA Office of Inspector General officials and key stakeholders.

GAO is making five recommendations, including that FNS improve its trafficking estimates by, for example, evaluating the accuracy of its assumption of the percentage of benefits that are trafficked; assess the benefits and costs of reauthorizing a sample of high risk stores more frequently than others; and move forward with plans to increase penalties for trafficking. FNS generally agreed with GAO's recommendations.