The U.S. workforce is aging, but there are few formal phased retirement programs here. We looked at 4 other countries to potentially inform a U.S. strategy.

We found program designs that could work under the unique institutional conditions here. For example, many of the programs were designed to work with traditional pensions, but some included employee-directed retirement plans, which are more common here. 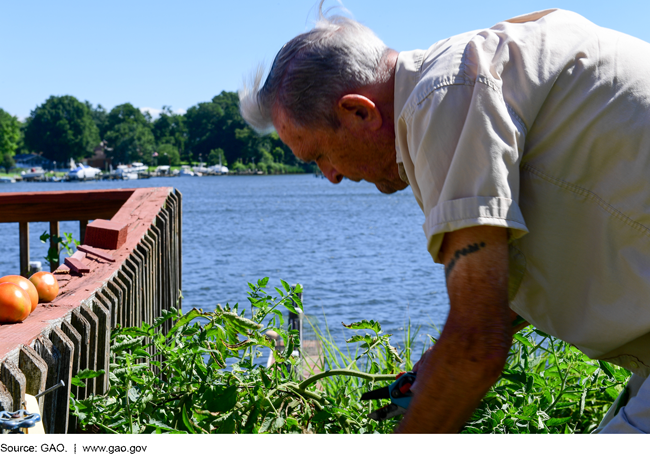 An elderly man picking tomatoes off of a tomato plant.

GAO's review of studies and interviews with employment and retirement experts identified 17 countries with aging populations and national pension systems similar to the Social Security program in the United States. These countries also have arrangements that allow workers to reduce their working hours as they transition into retirement, referred to as “phased retirement.” Phased retirement arrangements encourage older workers who might otherwise retire immediately to continue working, which could help alleviate pressures on national pension systems as well as address labor shortages of skilled workers. The17 countries had established phased retirement programs in different ways: at the national level via broad policy that sets a framework for employers; at the industry or sector level; or by single employers, often through the collective bargaining process.

GAO's four case study countries—Canada, Germany, Sweden, and the United Kingdom (UK)—were described as employing various strategies at the national level to encourage phased retirement, and specific programs differed with respect to design specifics and sources of supplemental income for participants. Canada and the U.K. were described as having national policies that make it easier for workers to reduce their hours and receive a portion of their pension benefits from employer-sponsored pension plans while continuing to accrue pension benefits in the same plan. Experts described two national programs available to employers and workers in Germany, with one program using tax preferences. Experts also said Sweden implemented a policy in 2010 that allows partial retirement and access to partial pension benefits to encourage workers to stay in the labor force longer.

Even with unique considerations in the United States, other countries' experiences with phased retirement could inform U.S. efforts. Some employer-specific conditions, such as employers offering employee-directed retirement plans and not being covered by collective bargaining are more common in the United States, but the case study countries included examples of designs for phased retirement programs in such settings. Certain programs allow access to employer-sponsored or national pension benefits while working part-time. For example, experts said the U.K. allows workers to draw a portion of their account based pension tax-free, and one U.K. employer GAO spoke to also allows concurrent contributions to those plans. In addition, experts said that certain program design elements help determine the success of some programs. Such elements could inform the United States experience. For instance, U.S. employers told us that while offering phased retirement to specific groups of workers may be challenging because of employment discrimination laws, a union representative in Germany noted that they reached an agreement where employers may set restrictions or caps on participation, such as 3 percent of the workforce, to manage the number of workers in the program. Employers in the U.S. could explore whether using a similar approach, taking into consideration any legal concerns or other practical challenges, could help them to control the number of workers participating in phased retirement programs.