To receive federal funding, state Medicaid programs are supposed to meet federal health care coverage requirements. These include coverage for abortion, but only in cases of rape, incest, or if the woman's life is endangered.

We found state-reported practices that did not comply with federal requirements.

1 state did not cover abortion in cases of rape or incest.

14 states did not cover the drug used in non-surgical abortions, even when the abortion was eligible for federal funding.

We made 3 recommendations to CMS, the Medicaid administrator, to ensure compliance with federal requirements for abortion coverage. 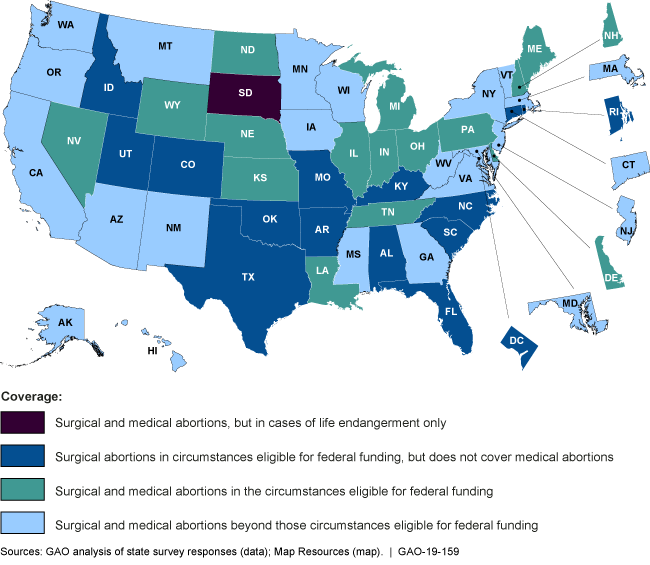 This color-coded map shows the varying policies in 50 states and the District of Columbia.

Women could face various challenges accessing abortions depending on where they live, and Medicaid beneficiaries may face additional challenges in some states. GAO identified seven key factors that could pose challenges to women accessing abortions, based on its interviews with providers and review of the literature: gestational limits, mandatory counseling, out-of-pocket costs, parental involvement requirements, provider availability, stigma and harassment, and waiting period requirements. The presence of these factors and their effect on abortion access—such as delays in care or increased costs—varied by state.

GAO also found that state variation in Medicaid abortion coverage and payment requirements could further complicate access for program beneficiaries. State Medicaid programs are generally required to cover abortions and can seek federal funding for such coverage when the pregnancy is the result of an act of rape or incest, or the life of the pregnant woman would be endangered unless an abortion is performed. States may also cover abortions under other circumstances, but federal funds may not be used. In GAO's survey, one state reported not covering abortions in cases of rape or incest, and 14 states reported not covering the drug used in medical abortions, which they are generally required to cover if the abortion is otherwise eligible for federal funding. Officials from the Centers for Medicare & Medicaid Services (CMS), the federal agency that oversees Medicaid, were unaware that these states were not covering the drug, and thus, have not taken any actions to address states' non-compliance.

While federal law prohibits federal funding for abortions in most circumstances, state Medicaid programs are required to cover abortions in limited circumstances. CMS is responsible for monitoring state compliance with federal requirements. However, concerns have been raised about challenges women may face obtaining Medicaid coverage for abortions eligible for federal funding, as well as with abortion access more broadly.

GAO was asked to review issues related to abortion access. This report examines (1) factors that may present challenges to women, including Medicaid beneficiaries, accessing abortions; and (2) federal and state information on the number of abortions eligible for federal Medicaid funding. GAO reviewed federal laws, regulations, and data sources; surveyed and received responses from Medicaid program officials in all 50 states and the District of Columbia; conducted a literature review; and interviewed CMS officials and eight abortion providers selected based on factors such as variation in Medicaid abortion coverage and geography.

GAO is making three recommendations to CMS to ensure state compliance with federal requirements for Medicaid abortion coverage, including coverage of the drug used for medical abortions. The Department of Health and Human Services concurred with these recommendations.