Shellfish aquaculture projects—the breeding, rearing, and harvesting of oysters, clams, and mussels—may require authorization from the U.S. Army Corps of Engineers. Among other things, the Corps examines compliance with navigation and environmental laws.

We reviewed permit applications for such projects from 2012 through 2017 and found the Corps approved 87% of the 3,751 applications it received. It denied less than 1%. The rest were withdrawn.

We also reviewed the experiences of 15 applicants. Ten said the time it took to get a permit, which ranged from 1 day to 4 months, was reasonable. Five said their 18-day to 8-month waits were not.

Washington state produces about 90% of the world's farmed geoducks. This species of saltwater clam has sold for as much as $100 per pound in Asia. 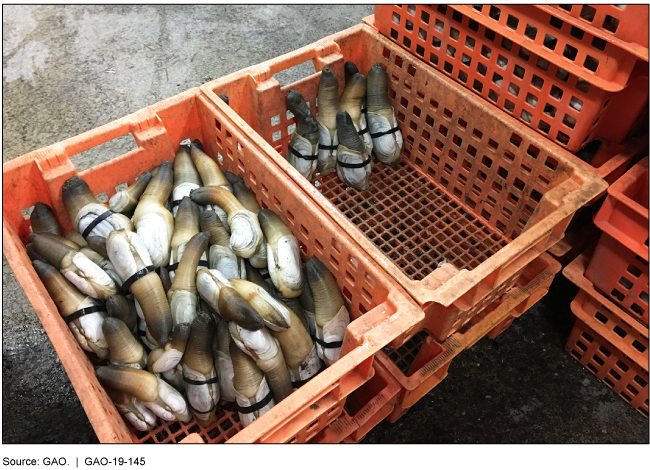 The U.S. Army Corps of Engineers (Corps) authorized most (87 percent) of the 3,751 shellfish aquaculture applications it received from 2012 through 2017, according to Corps data. Of the 19 Corps districts that have coastal waters within their geographic areas of responsibility, 17 districts received and authorized applications. The majority of those districts (13 of 17) authorized applications using Nationwide Permit 48, a type of permit intended to streamline the authorization process for shellfish aquaculture activities. Additionally, districts may add conditions to nationwide permits or develop region-specific permits to address state or regional environmental concerns. Of the four districts GAO reviewed in detail, two districts added regional conditions applicable to Nationwide Permit 48, such as prohibiting shellfish activity within submerged aquatic vegetation beds or saltmarshes.

The 15 permit applicants from the four districts GAO reviewed had mixed views on their experiences with seeking authorization for their shellfish aquaculture activities. For example, 10 applicants across the four districts described the length of time to authorize their activities—ranging from 1 day to about 4 months—as reasonable, with several applicants indicating the Corps was efficient in reviewing their applications. In contrast, five applicants from three Corps districts said that the amount of time it took for the Corps to authorize their shellfish aquaculture activities—ranging from 18 days to about 8 months—was unreasonable. Corps officials from the four districts indicated they have taken some steps to help reduce authorization review time. For example, the four districts took steps to more efficiently conduct reviews under the Endangered Species Act. This has in turn helped reduce the Corps' time frames for issuing authorizations, according to Corps officials GAO interviewed. For instance, officials from one district said their review time declined from over 30 days to 1 to 2 days as a result of the change in the review process.

Entities undertaking shellfish aquaculture activities (i.e., the breeding and harvesting of oysters, clams, and mussels) may need to submit an application to the Corps in certain circumstances for authorization to conduct these activities. The Corps authorizes such activities using various permits, as long as the activities comply with various environmental and other laws.

GAO reviewed laws and permitting documents and analyzed data on the number, outcomes, and types of permits the Corps used for 2012 through 2017 from the Corps' permitting database and assessed its reliability. GAO also reviewed detailed information from a non-generalizable sample of 15 permit applications and interviewed the applicants and Corps officials from four Corps districts, selected to reflect variation in geographic location and shellfish activity; the information from the four districts is not generalizable to other Corps districts.