In the United States, nuclear weapons contain over 80 percent non-nuclear parts. Most of these parts are procured or produced by the National Nuclear Security Administration's site in Kansas City. This site constructed a new facility in FY 2012.

However, we found that workload projections have increased significantly from forecasts used to plan this facility—for instance, production and administrative staff will need to almost double by 2020 to meet workload demands. NNSA expects to meet future workload demands through actions such as hiring staff and leasing an additional 250,000 square feet of production space in 2019. 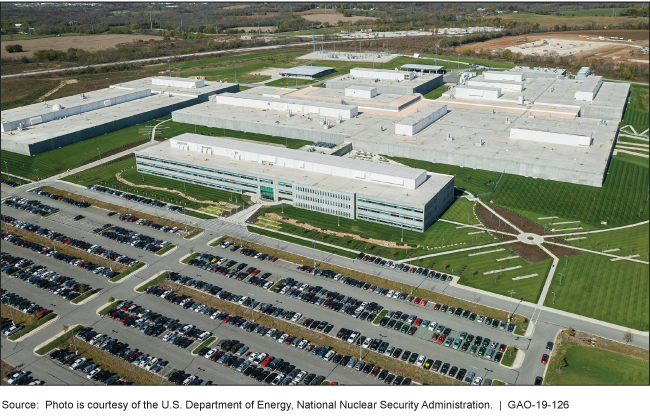 Aerial photo of the new facility.

Workload forecasts have significantly changed at the National Nuclear Security Administration's (NNSA) primary site for procuring or producing nonnuclear parts and components of nuclear weapons since the site's modern production facility was built in 2012. Specifically, workload projections made by the contractor operating the site, known as the Kansas City National Security Campus (Kansas City site), has increased significantly from forecasts used in planning the site's new production facility. More recent forecasts show that to meet workload requirements, production and administrative staff will need to almost double by 2020 compared to 2014 levels. For example, workload to modernize the B61-12 and W88 weapons systems will double during fiscal years 2020 through 2022.

According to NNSA officials and contractor staff, the site has identified and begun to mitigate management challenges to meeting future workload, including:


Current mitigation efforts should help the site meet currently planned increased workload and capacity demands, according to contractor and NNSA analyses. However, the February 2018 Nuclear Posture Review—conducted by the Department of Defense under the direction of the President to determine the role of nuclear weapons in the nation's security strategy—may change requirements and add to the site's workload in ways not yet fully known because studies and plans in response to the review are not fully complete.

Modernization of the nation's nuclear stockpile depends on timely procurement and production of nonnuclear parts and components. Such parts and components make up over 80 percent of the items in a nuclear weapon. The Kansas City site procures or produces most of these parts, under NNSA oversight. In fiscal year 2012, the site completed construction of a modern production facility. The new facility was expected to accommodate rising future workload demands, based on the forecasts that were current in 2012, according to Kansas City site contractor representatives.

The Senate committee report accompanying a bill for the National Defense Authorization Act for Fiscal Year 2018 included a provision for GAO to review the Kansas City site's staffing plans and capabilities to meet national security requirements. This report examines (1) workload forecasts for the site since 2012, and (2) management challenges the site has identified for achieving the forecasted workload, and actions the site has taken to mitigate these challenges.