The United States has invested about $84 billion since 2002 to help create long-term security in Afghanistan—including providing and maintaining equipment for the Afghan defense and security forces.

We reviewed the capacity of these forces to operate and sustain U.S.-purchased weapon systems and equipment. We found that DOD lacks reliable information on how well most Afghan forces operate and maintain this equipment because it has little direct contact with the front-line units that make up about three-quarters of the Afghan forces.

We recommended DOD develop options to collect more reliable information about this equipment.

Example of U.S.-Purchased Equipment for the Afghan National Defense and Security Forces 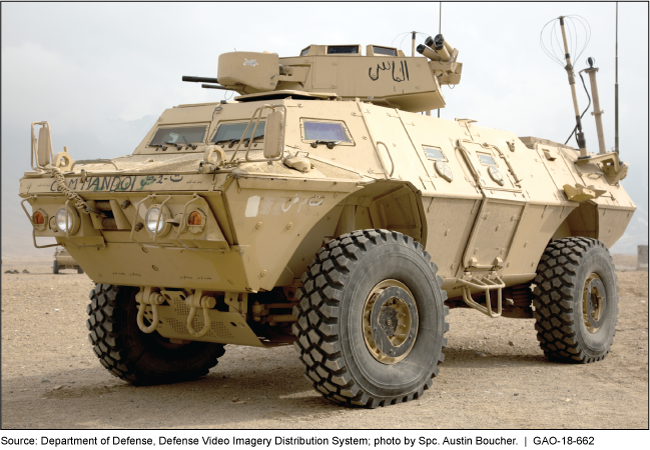 Since the Resolute Support mission began in 2015, the Afghan National Defense and Security Forces (ANDSF) have improved some fundamental capabilities, such as high-level operational planning, but continue to rely on U.S. and coalition support to fill several key capability gaps, according to Department of Defense (DOD) reporting. DOD has initiatives to address some ANDSF capability gaps, such as a country-wide vehicle maintenance and training effort, but DOD reports it does not expect the ANDSF to develop and sustain independent capabilities in some areas, such as logistics, for several years.

Examples of U.S.-Purchased Equipment for the Afghan National Defense and Security Forces

While DOD has firsthand information on the abilities of the Afghan Air Force and Special Security Forces to operate and maintain U.S.-purchased equipment, it has little reliable information on the equipment proficiency of conventional ANDSF units. U.S. and coalition advisors are embedded at the tactical level for the Air Force and Special Security Forces, enabling DOD to directly assess those forces' abilities. However, the advisors have little direct contact with conventional ANDSF units on the front lines. As a result, DOD relies on those units' self-assessments of tactical abilities, which, according to DOD officials, can be unreliable.

Developing independently capable ANDSF is a key component of U.S. and coalition efforts to create sustainable security and stability in Afghanistan under the North Atlantic Treaty Organization (NATO)-led Resolute Support mission. The United States is the largest contributor of funding and personnel to Resolute Support, providing and maintaining ANDSF equipment, along with training, advising, and assistance to help the ANDSF effectively use and sustain the equipment in the future.

House Report 114-537 included a provision for GAO to review the ANDSF's capability and capacity to operate and sustain U.S.-purchased weapon systems and equipment. This report addresses (1) what has been reported about ANDSF capabilities and capability gaps and (2) the extent to which DOD has information about the ANDSF's ability to operate and maintain U.S.-purchased equipment. To conduct this work, GAO analyzed DOD and NATO reports and documents, examined three critical equipment types, and interviewed DOD officials in the United States and Afghanistan.

This is a public version of a sensitive report issued in September 2018. Information that DOD deemed sensitive has been omitted.