States analyze data to try to spot fraudulent use of SNAP, such as when recipients sell benefits for cash or provide false information so they can collect benefits. Five of the states we examined reported using sophisticated data mining techniques to look for unusual spending patterns and flag the cases most likely to involve fraud.

We recommended that the federal administrator of SNAP more widely distribute information to states about successful state data analysis strategies. 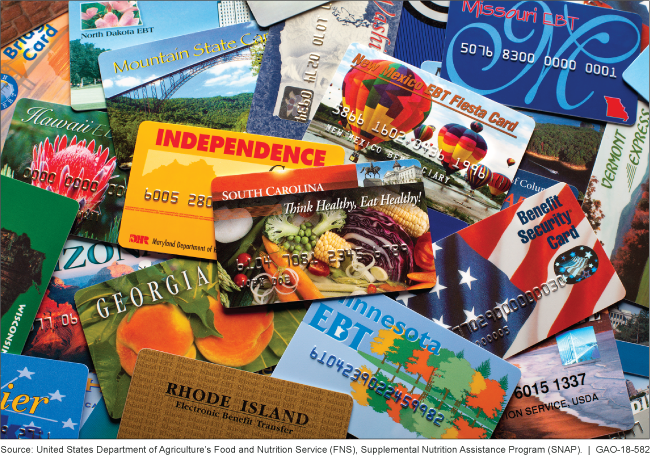 Supplemental Nutrition Assistance Program (SNAP) recipients are allowed to spend their benefits outside their state of residence, and GAO's analysis of fiscal year 2017 SNAP data in three selected states found that overall about 2 percent of households made purchases, both in state and out-of-state, potentially indicative of trafficking—the prohibited exchange of benefits for cash or nonfood goods or services. Also, GAO found little difference in potential trafficking behaviors between households that made one or more purchases out-of-state and those that shopped only in their home state.

Officials in all seven states GAO reviewed said they conducted data matching. Officials in five of these states stated that they use more sophisticated data analytics including data mining to help identify potential fraud (see figure). These officials cited advantages to using more sophisticated analytics to automate fraud detection and prioritize cases, allowing them to focus investigative resources on cases most likely to involve fraud. For example, officials in Mississippi reported that overpayment collections increased $2 million since the state incorporated more data techniques into its fraud detection efforts. However, officials in all seven selected states cited factors such as high cost, resource demands, data limitations and organizational support as challenges that affect their ability to use or maintain more advanced data-analytics techniques.

Example of Use of Data Analytics by State SNAP Agencies

The U. S. Department of Agriculture's Food and Nutrition Service (FNS) has helped some states adopt certain leading practices for data analytics, but its current outreach is limited. FNS has provided assistance to some states through pilot projects, grants, and training, but, beyond a recently issued guide, FNS has done little to disseminate information more broadly about successful efforts to adopt data analytics. FNS officials said they are in the early stages of promoting data analytics for SNAP fraud prevention and detection, and their efforts have focused on assessing the current capability of states to use data analytics and determining analytic practices that are effective. State officials GAO interviewed said that training provided was helpful but expressed concern about their access to information on successful data analytic approaches. Disseminating information to states on successful strategies could help states address challenges.

The federal government provided $64 billion in SNAP benefits in fiscal year 2017 to help approximately 42 million low-income individuals purchase food. SNAP is administered by FNS in partnership with states. To help reduce the risk of improper receipt or use of SNAP benefits, states use data analytics, including data matching and data mining, to identify patterns or trends indicative of potential fraud in SNAP purchases. Based on concerns about potential SNAP benefit trafficking across state lines, GAO was asked to review out-of-state transactions and states' efforts to combat such fraud.

This report examines (1) the extent to which SNAP households in selected states made out-of-state purchases that may indicate potential fraud, (2) the advantages and challenges selected states have experienced in using data analytics to identify potential fraud, and (3) how FNS has assisted states in implementing leading practices for data analytics. GAO analyzed fiscal year 2017 data on SNAP purchases for North Dakota, Washington, and the District of Columbia, which had large percentages of non-border out-of-state purchases and interviewed FNS officials and officials in these states as well as in Massachusetts, Mississippi, New Mexico, and Wisconsin about their use of data analytics compared with leading practices.