The U.S. government has invested over $10 billion in counternarcotics and security efforts in Colombia since 1999. Security has improved but cocaine production has more than tripled from 2013 through 2017.

The U.S. counternarcotics approach in Colombia includes disrupting drug trafficking, destroying coca crops, and supporting alternative livelihoods for coca farmers. We found the State Department has not comprehensively reviewed this approach. Such a review could help State ensure U.S. agencies are pursuing the mix of activities with the greatest likelihood of long-term success. 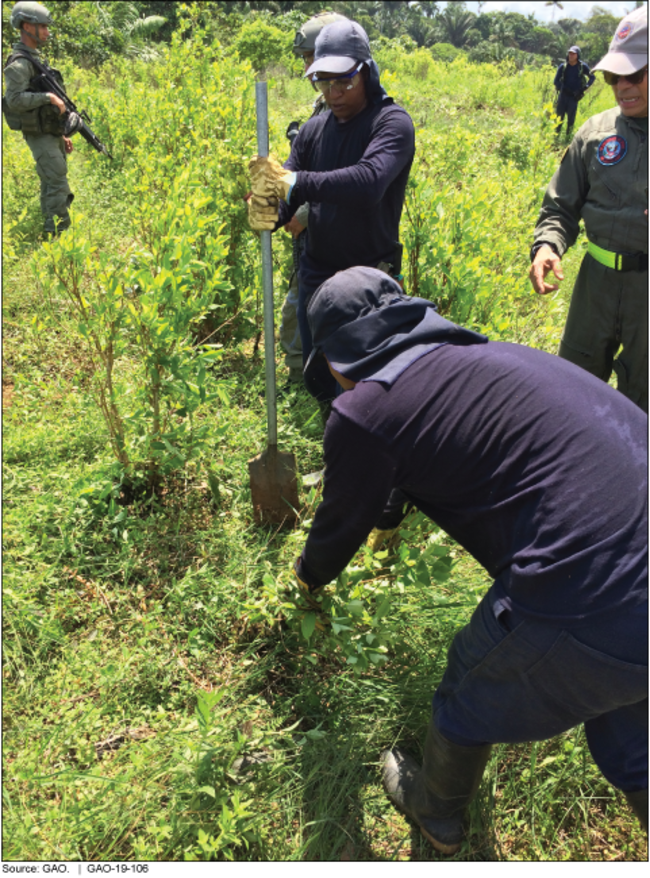 This photo shows men uprooting a plant while soldiers stand nearby.

U.S. agencies that provide counternarcotics assistance to Colombia conduct performance monitoring of their activities, such as by tracking the hectares of coca fields eradicated and the amount of cocaine seized, but have not consistently evaluated the effectiveness of their activities in reducing the cocaine supply. The U.S. Agency for International Development (USAID) has evaluated some of its alternative development programs, but the Department of State (State), which has lead responsibility for U.S. counternarcotics efforts, has not evaluated the effectiveness of its eradication and interdiction activities, as called for by its evaluation policies. Additionally, State has not conducted a comprehensive review of the U.S. counternarcotics approach, which relies on a combination of eradication, interdiction, and alternative development. Without information about the relative benefits and limitations of these activities, the U.S. government lacks key information to determine the most effective combination of counternarcotics activities.

GAO's review of U.S. agency performance monitoring data and third-party research offers some information about the relative effectiveness of eradication, interdiction, and alternative development activities. For example, available evidence indicates that U.S.-supported eradication efforts in Colombia may not be an effective long-term approach to reduce the cocaine supply, due in part to coca growers responding to eradication by moving coca crops to national parks and other areas off limits to eradication. Agency data show that U.S.-supported interdiction efforts in Colombia seized hundreds of tons of cocaine and arrested thousands of drug traffickers, yet the net cocaine supply has increased and third-party studies have mixed findings on the long-term effectiveness of interdiction efforts. USAID evaluations indicate that alternative development programs in Colombia have provided legal economic opportunities to some rural populations previously involved in illicit crop production. However, USAID as well as third-party research suggests that alternative development requires significant and sustained investment and some programs have had design and sustainability challenges.

Colombia is the world's leading producer of cocaine, with production levels more than tripling from 2013 through 2017 (see figure). The U.S. and Colombian governments have been longstanding partners in the fight against drug trafficking. Since the launch of Plan Colombia in 1999, the U.S. government has invested over $10 billion in counternarcotics efforts in Colombia. This assistance has supported a range of eradication, interdiction, and alternative development programs.

GAO recommends that State, in consultation with relevant agencies, (1) evaluate the effectiveness of eradication and interdiction in reducing the cocaine supply in Colombia and (2) undertake a comprehensive review of the U.S. counternarcotics approach in Colombia that considers the relative benefits and limitations between eradication, interdiction, and alternative development efforts. State generally concurred with the recommendations.