Foot-and-mouth disease is a highly contagious livestock disease (which rarely infects humans). Since 2001, outbreaks abroad have cost billions of dollars. A U.S. outbreak would likely halt exports of all livestock products, and could have serious economic consequences.

USDA has learned lessons from abroad, conducted outbreak exercises, and identified the need for additional preparedness improvements, such as a better process for allocating its limited vaccine supply. However, it has not followed its procedures for prioritizing improvements and many remain incomplete.

We recommended that USDA prioritize and monitor these improvements. 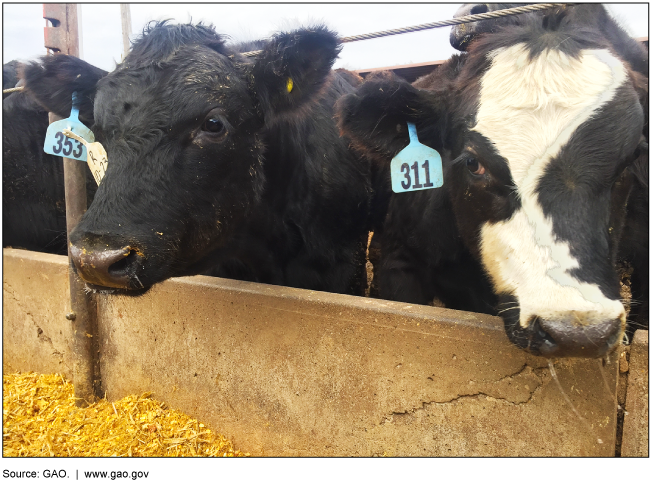 Two cows with ear tags by a concrete feeding trough.

The U.S. Department of Agriculture's (USDA) planned approach for responding to an outbreak of foot-and-mouth disease (FMD) includes several strategies. These strategies generally rely on killing infected and susceptible animals, vaccinating uninfected animals, or a combination of both approaches. USDA would implement one or more of the strategies, depending on factors such as the outbreak's size and the resources available, according to agency documents.

USDA would likely face significant challenges in pursuing its response goals of detecting, controlling, and containing FMD quickly; eradicating FMD while seeking to stabilize industry and the economy; and facilitating continuity of commerce in uninfected animals. GAO identified challenges in 11 areas—including allocating a limited supply of FMD vaccine—based on its review of USDA documents, responses to GAO's questionnaire, and interviews with agency officials and others with expertise on FMD. According to USDA, the agency may not have a sufficient supply of FMD vaccine to control more than a small outbreak because of limited resources to obtain vaccine. As shown below, the current vaccine supply would be sufficient to protect about 14 percent of Texas's cattle or about 4 percent of Iowa's swine; these states' cattle and swine populations are the nation's largest. The Agriculture Improvement Act of 2018 includes a provision to increase the FMD vaccine supply.

FMD is a highly contagious viral disease that causes painful lesions on the hooves and mouths of some livestock, making it difficult for them to stand or eat, thus greatly reducing meat and milk production. The United States has not had an FMD outbreak since 1929, but FMD is present in much of the world. An FMD outbreak in the United States could have serious economic impacts, in part because trade partners would likely halt all imports of U.S. livestock and livestock products until the disease was eradicated. These imports were valued at more than $19 billion in 2017.

GAO was asked to review USDA's efforts to prepare for an FMD outbreak. This report examines (1) USDA's planned approach for responding to an FMD outbreak; (2) challenges USDA would face in pursuing its response goals; and (3) how USDA identifies, prioritizes, and monitors corrective actions to mitigate the challenges. GAO observed a USDA FMD preparedness exercise; reviewed agency documents and nongeneralizable questionnaire responses from 29 respondents from federal and state government, livestock industries, and universities; and interviewed officials from federal and state governments and representatives of livestock industries and universities.

GAO is recommending that USDA follow its procedures to prioritize and monitor the completion of corrective actions that the agency has identified for FMD preparedness. USDA agreed with these recommendations, and described actions it will take to implement them.