People often eat fruits and vegetables raw, so it's important to prevent contamination that may lead to foodborne illness.

In 2011, a new law brought major changes to food safety efforts. One of these changes was the Food and Drug Administration's produce rule. It established the first enforceable national food safety standards for produce.

We reported in 2016 on FDA's use of an information clearinghouse to respond to business concerns about the standards. In this report, we examined FDA's responses since then, which have included funding training for industry and announcing a review of water quality standards under the rule. 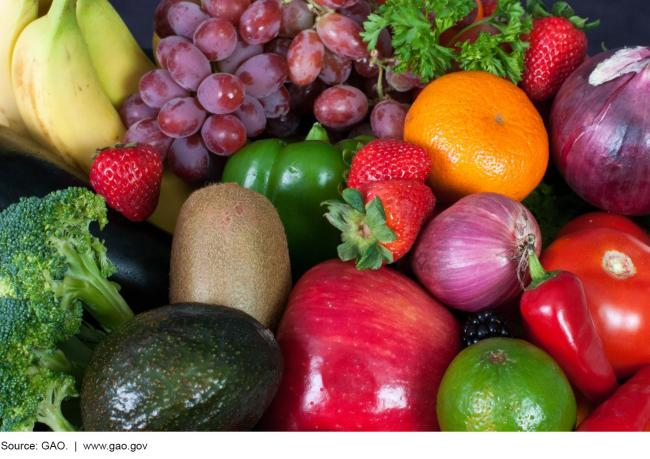 Photo of fruits and vegetables.

Since GAO's November 2016 report on the Food and Drug Administration's (FDA) 2015 produce rule, the agency has continued to use its Technical Assistance Network (TAN) to evaluate and respond to questions and concerns about the rule. GAO found that since the issuance of its 2016 report, which contained data as of September 3, 2016, 2,665 more questions were submitted to the TAN, 230 of which pertained to the produce rule, and of those 230 questions, 154 were submitted by businesses (see fig.).

aThe TAN also receives questions about other rules pertaining to the FDA Food Safety Modernization Act, such as rules on imported food and the sanitary transportation of food.

bOthers include members of academia, consumers, and federal or state regulators.

Most produce rule-related TAN questions concerned agricultural water standards, such as methods for testing water. In addition to the TAN, FDA has taken other steps to evaluate and respond to business concerns, including funding training for industry and visiting farms. FDA is also reviewing the rule's water standards and published a proposed rule in September 2017 to extend the compliance dates associated with those standards in response to concerns.

FDA has begun collecting survey results on the web page used for submitting TAN questions and continues to develop a survey to assess the timeliness and quality of TAN responses. FDA also continued to develop metrics intended to assess its overall efforts to evaluate and respond to business concerns, officials reported. Produce industry representatives told GAO that FDA is open to hearing questions and concerns, but businesses need more information to comply with the rule and are awaiting FDA's forthcoming guidance on parts of the rule.

FDA officials reported facing two challenges in evaluating and responding to business concerns: identifying businesses subject to the rule and providing consistent, region-specific information in response to concerns. Officials said that the agency's cooperative agreement with 43 states plays a key role in addressing these challenges, as does the Produce Safety Network, a network of region-based FDA food safety experts.

Although the United States has one of the safest food supplies in the world, foodborne illness is a common public health problem; some of this illness can be linked to produce. For example, in 2017, a Salmonella outbreak linked to imported papayas sickened more than 200 people in 23 states and killed 1. FDA's produce rule, one of a number of rules required by the FDA Food Safety Modernization Act, established the first enforceable national food safety standards for produce. The Agricultural Act of 2014 required that the produce rule include “a plan to systematically…develop an ongoing process to evaluate and respond to business concerns” about the rule and a provision for GAO to report on FDA's efforts 1 year after the promulgation of the final rule and again the following year. In November 2016, GAO issued the first report.