In 2015, Medicare spent about $26 billion on Part B drugs, which are typically administered under a doctor’s supervision. We looked at the 84 most expensive Part B drugs and found that for about a quarter of them, Medicare represented 50% or more of their market.

By law, the amount Medicare pays for a Part B drug is generally based on the drug’s market price, no matter how high or low that price may be. Therefore, when Medicare accounts for a large share of a drug's market, the manufacturer may have less incentive to price the drug competitively. 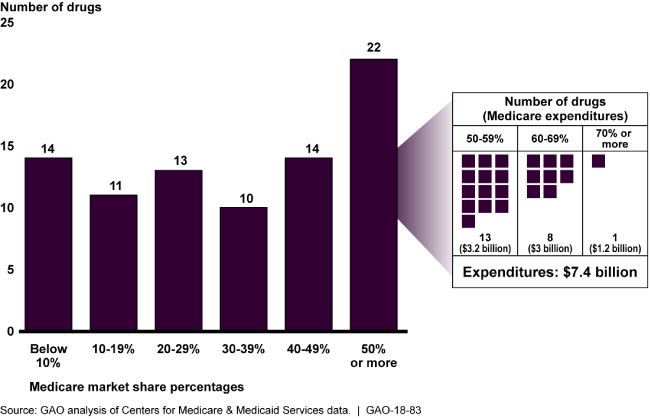 Medicare bases its payments for most Part B drugs on the average amount that individual purchasers such as physicians paid to manufacturers, net of discounts and rebates, called the average sales price (ASP). For most Part B drugs, Medicare sets the payment rate equal to the ASP plus an additional 6 percent. Medicare's market share—the percentage of total units of a drug sold that were provided to Medicare beneficiaries—is one of several factors that can affect the market price for drugs covered under Part B. By law, Medicare pays the ASP-based rate regardless of how high or low that rate may be, while a private insurer can respond to higher pricing by modifying coverage or eliminating a drug from its benefit package. Thus, when Medicare accounts for a large share of the market for a drug, a manufacturer may have less incentive to price the drug competitively.

In 2015, Medicare's fee-for-service (FFS) program represented 50 percent or more of the market for 22 of the 84 most expensive Part B drugs GAO analyzed. These 22 drugs collectively represented $7.4 billion in spending—or about 30 percent of all Medicare spending on Part B drugs in 2015. 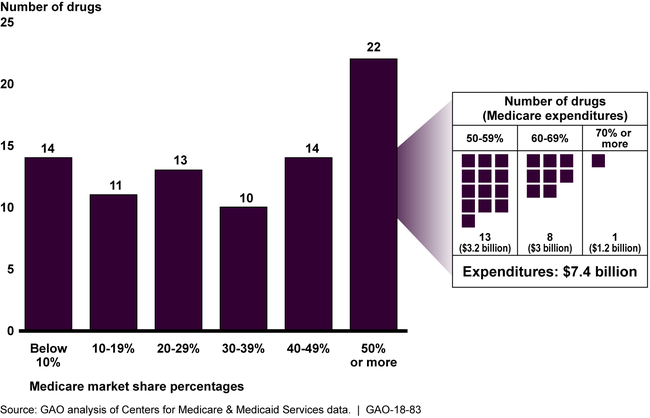 Among the 22 drugs where Medicare represented the majority of the market, 18 had a single manufacturer. Single manufacturers—lacking direct competitors—may have greater ability to increase a drug's price without seeing sales decline.

In 2015, Medicare spent about $26 billion on Part B drugs, including injectable drugs, and certain cancer drugs, which are typically administered in a physician's office or hospital outpatient department. GAO was asked to examine Medicare's share of the Part B drug market. This report describes Medicare's market share for high-expenditure Part B drugs paid based on ASP and the characteristics of those drugs.

To determine Medicare's market share for Part B drugs paid based on ASP, GAO used 2015 Medicare FFS claims data—the most recent year available at the time of GAO's analysis—to identify the 50 Part B drugs with the highest total expenditures and the 50 drugs with the highest expenditures per beneficiary. In total, GAO analyzed 84 drugs because some were in both groups. GAO used Medicare claims and manufacturer sales data from the Centers for Medicare & Medicaid Services (CMS) to calculate Medicare's market share for each drug in 2015. To examine characteristics of the 84 drugs, such as whether a drug was produced by a single manufacturer, GAO analyzed data from the Food and Drug Administration and Truven Health Analytics' RED BOOK, which publishes drug pricing and product information.

GAO received technical comments on a draft of this report from the Department of Health and Human Services, the agency that oversees CMS, and incorporated these comments as appropriate.