DOD and EPA have found chemicals in drinking water at or near military installations that may cause cancer and other health issues. Some of these chemicals can be found in firefighting foam and rocket propellants.

The Department of Defense (DOD) has not internally reported all data on compliance with health-based drinking water regulations or used available data to assess compliance. DOD data for fiscal years 2013-2015 indicate that DOD public water systems complied with Environmental Protection Agency (EPA) and state health-based drinking water regulations at levels comparable with other systems in the United States. However, the military departments did not report all violations to DOD, i.e., while 77 installations reported violations to DOD, GAO found that at least 16 additional installations did not. Until DOD takes steps to increase the clarity and understanding of its internal reporting requirements, it may not have the data it needs to fully oversee compliance. DOD also has not used its data to determine why its two types of systems—one that provides DOD-treated water and another that provides non-DOD-treated water—have different compliance rates. Specifically, DOD's data indicate that about 99 percent of the people who received non-DOD-treated drinking water were served by systems with no violations, while about 89 percent of the people who received DOD-treated drinking water were served by systems with no violations. Absent further analysis of its data, DOD may not be able to improve overall compliance.

DOD has initiated actions to address concerns with both its firefighting foam and also with elevated levels in drinking water of perfluorooctane sulfonate (PFOS), perfluorooctanoic acid (PFOA), and perchlorate, which are DOD-identified emerging contaminants. PFOS and PFOA can be found in DOD's firefighting foam. DOD has restricted its use of this foam and is funding efforts to develop a new foam that meets DOD performance requirements. Additionally, at 11 military installations (see fig.), DOD has shut down wells, provided alternate water sources, or installed water treatment systems to respond to elevated levels of PFOS and PFOA, at times in response to EPA and state orders.

Military Installations Where DOD Has Initiated Actions to Address Elevated Levels of PFOS and PFOA in Installation Drinking Water, as of March 2017 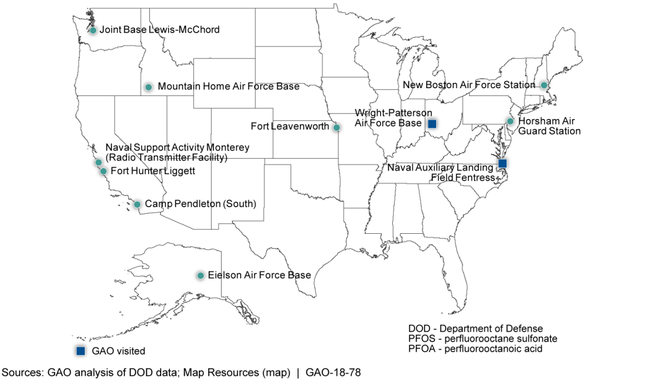 According to DOD, about 3 million people in the United States receive drinking water from DOD public water systems, which are to comply with EPA and state health-based regulations. EPA and DOD have detected elevated levels of two unregulated, DOD-identified emerging contaminants found in firefighting foam—PFOS and PFOA—in drinking water at or near installations. Perchlorate, an unregulated chemical used by DOD in rocket fuel, can also be found in drinking water.

GAO is making five recommendations to improve DOD's reporting and use of data on compliance with health-based drinking water regulations. DOD concurred with the recommendations.

Bottom’s Up to Clean Drinking Water!