This testimony addresses our earlier work on 2 immigration topics:

The U.S. immigration court system, which considers hundreds of thousands of removal cases a year. The case backlog doubled from 2006 through 2015, even as new cases declined. We recommended improving the system's management, including its hiring process.

The Alternatives to Detention program, in which people with pending cases are released and may be monitored electronically. Immigration and Customs Enforcement reported high levels of program compliance from 2011 through 2013 but did not collect data on the entire program. We recommended improving program performance measures. 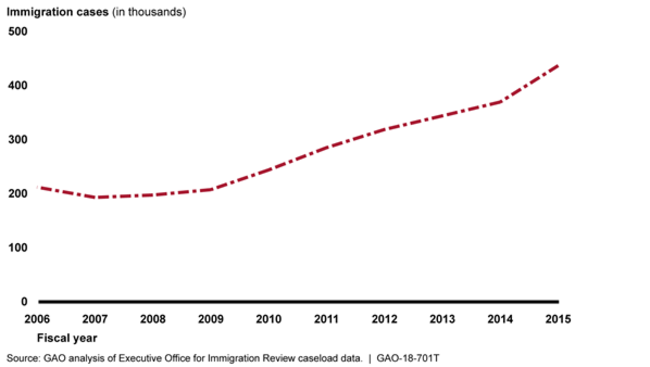 In June 2017, GAO reported that the Executive Office for Immigration Review's (EOIR) immigration court case backlog—cases pending from previous years still open at the start of a new fiscal year—more than doubled from fiscal years 2006 through 2015 (see figure), primarily due to declining cases completed per year. 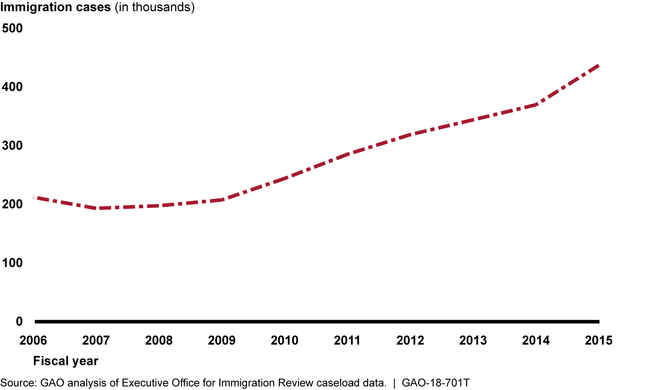 GAO also reported in June 2017 that EOIR could take several actions to address management challenges related to hiring, workforce planning, and technology utilization, among other things. For example, EOIR did not have efficient practices for hiring immigration judges. EOIR data showed that on average from February 2014 through August 2016, EOIR took more than 21 months to hire a judge. GAO also found that EOIR was not aware of the factors most affecting the length of its hiring process. GAO recommended that EOIR assess its hiring process to identify efficiency opportunities. As of January 2018, EOIR had made progress in increasing its number of judges but remained below its fiscal year 2017 authorized level. To better ensure that it accurately and completely identifies opportunities for efficiency, EOIR needs to assess its hiring process.

The Department of Justice's EOIR is responsible for conducting immigration court proceedings, appellate reviews, and administrative hearings to fairly, expeditiously, and uniformly administer and interpret U.S. immigration laws. The Department of Homeland Security's ICE manages the U.S. immigration detention system, which houses foreign nationals, including families, whose immigration cases are pending or who have been ordered removed from the country. ICE implemented the ATD program in 2004 to be a cost-effective alternative to detention that uses case management and electronic monitoring.

This statement addresses (1) EOIR's caseload, including the backlog, and how EOIR manages immigration court operations, including hiring, workforce planning, and technology use; and (2) participation in and the cost of the ATD program and the extent to which ICE has measured the performance of the ATD program. This statement is based on two reports and a testimony GAO issued from November 2014 through April 2018, as well as actions agencies have taken, as of September 2018, to address resulting recommendations. For the previous reports and testimony, GAO analyzed EOIR and ICE data, reviewed documentation, and interviewed officials.

GAO previously made recommendations to EOIR to improve its hiring process, among other things, and to ICE to improve ATD performance assessment. EOIR and ICE generally agreed and implemented or reported actions planned to address the recommendations.