The firefighting foam DOD has used for decades contains chemicals that, at elevated exposure levels, can increase risks of cancer or other health issues. As a result, DOD:

identified 401 installations with known or potential releases of these chemicals

took actions, like providing alternative drinking water, at 32 locations (as of August 2017)

This testimony is largely based on our report on DOD's response to such contamination in drinking water, and is a part of our body of work on the federal government’s environmental liabilities, an issue on our High Risk list. 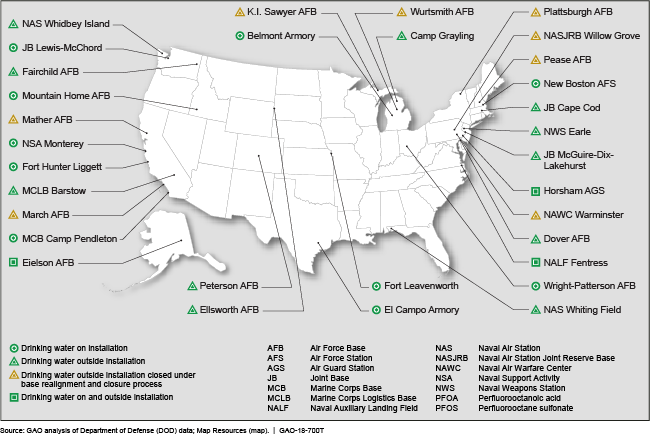 GAO reported in October 2017 that the Department of Defense (DOD) had initiated actions to address elevated levels of perfluorooctane sulfonate (PFOS) and perfluorooctanoic acid (PFOA) in drinking water at or near military installations. PFOS and PFOA are part of a larger class of chemicals called per- and polyfluoroalkyl substances (PFAS), which can be found in firefighting foam used by DOD. In May 2016, the Environmental Protection Agency (EPA) issued nonenforceable drinking water health advisories for those two chemicals. Health advisories include recommended levels of contaminants that can be present in drinking water at which adverse health effects are not anticipated to occur over specific exposure durations.

In response to those health advisories, DOD's military departments directed their military installations to (1) identify locations with a known or suspected release of PFOS and PFOA and address any releases that pose a risk to human health, which can include people living outside DOD installations, and (2) test for PFOS and PFOA in installation drinking water and address any contamination above the levels in EPA's health advisories. For example:

In addition to actions initiated by DOD, GAO reported in October 2017 that the department also had received and responded to four orders from EPA and state regulators that required DOD to address PFOS and PFOA levels that exceeded EPA's health advisory levels for drinking water at or near four installations.

GAO also reported in October 2017 that DOD was taking steps to address health and environmental concerns with its use of firefighting foam that contains PFAS. These steps included restricting the use of existing foams that contain PFAS; testing foams to identify the amount of PFAS they contain; and funding research on developing PFAS-free foam that can meet DOD's performance requirements, which specify how long it should take for foam to extinguish a fire and keep it from reigniting. In a June 2018 report to Congress, DOD stated that no commercially available PFAS-free foam has met DOD's performance requirements and that research to develop such a PFAS-free foam is ongoing.

According to health experts, exposure to elevated levels of PFOS and PFOA could cause increased cancer risk and other health issues in humans. DOD has used firefighting foam containing PFOS, PFOA, and other PFAS since the 1970s to quickly extinguish fires and ensure they do not reignite. EPA has found elevated levels of PFOS and PFOA in drinking water across the United States, including in drinking water at or near DOD installations.

This statement provides information on actions DOD has taken to address elevated levels of PFOS and PFOA in drinking water at or near military installations and to address concerns with firefighting foam.

This statement is largely based on a GAO report issued in October 2017 (GAO-18-78). To perform the review for that report, GAO reviewed DOD policies and guidance related to PFOS and PFOA and firefighting foam, analyzed DOD data on testing and response activities for PFOS and PFOA, reviewed the four administrative orders issued by EPA and state regulators to DOD on addressing PFOS and PFOA in drinking water, visited seven installations, and interviewed DOD and EPA officials. This statement also includes updated information based on two 2018 DOD reports to Congress—one on PFOS and PFOA response and one on firefighting foam—as well as discussions with DOD officials.