State-reported data help the federal government oversee the Medicaid program, which made an estimated $36.7 billion in payment errors in 2017. However, there have been longstanding concerns that those data are not sufficient for effective oversight.

To help, federal administrators established a new data repository. Nearly all states now submit data that could be used to improve oversight and program management. However, concerns persist over the completeness and comparability of state data.

We recommended federal administrators take steps to expedite collection of complete and comparable data, and draft a plan for how they will use the data. 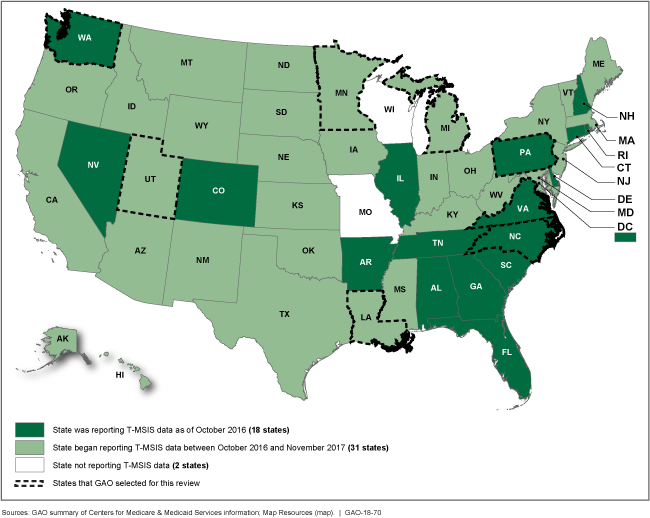 A map of the United States showing which states are participating and when they started.

As of November 2017, 49 states had begun reporting Transformed Medicaid Statistical Information System (T-MSIS) data—a significant increase from 18 states reporting these data one year earlier. All eight states GAO reviewed identified converting their data to the T-MSIS format on an element-by-element basis as the main challenge in their reporting efforts. For some data elements, states had to expand or collapse their data to match the T-MSIS format.

With the continued implementation of T-MSIS, the Centers for Medicare & Medicaid Services (CMS) has taken an important step toward developing a reliable national repository for Medicaid data. However, data challenges have hindered states' and CMS's use of the T-MSIS data for oversight.

CMS has taken steps for the initial use of T-MSIS data, but does not have a plan or associated timeframes for using these data for oversight. As a result, important CMS goals for T-MSIS, such as reducing states' reporting burden and enhancing program integrity activities, are not being fully realized.

GAO and others have identified insufficiencies in state-reported Medicaid data that affect CMS's ability to oversee the program effectively. Recent increases in improper payments—estimated at $36.7 billion in fiscal year 2017—exacerbate concerns about program oversight.

CMS officials identified the T-MSIS initiative, which began in 2011, as its main effort to improve Medicaid data, and cited aspects of T-MSIS aimed at improving the scope and quality of state-reported data. GAO reported in January 2017 that it is unclear when T-MSIS data will be available from all states; how CMS will ensure data quality; or how the data will be used to enhance oversight of Medicaid.

GAO was asked to review states' experiences with T-MSIS implementation and planned uses of T-MSIS data. This report examines (1) states' experiences regarding T-MSIS implementation, and (2) challenges to CMS's and states' use of T-MSIS data for oversight. GAO reviewed federal laws, guidance, and internal control standards; reviewed documents and interviewed officials from eight states, selected based on their T-MSIS reporting status, location, program expenditures, and other factors; and interviewed CMS officials, CMS contractors, and individuals involved with other states' T-MSIS efforts.

GAO recommends that CMS (1) improve T-MSIS's completeness and comparability to expedite its use, and (2) articulate a specific oversight plan. The Department of Health and Human Services concurred with GAO's recommendations.