What do elephants, pangolins, and tigers have in common?

The illegal wildlife trade—estimated to be worth at least $7 billion annually—is pushing these and other species to the brink of extinction. The United States and Asia are key sources of demand for a variety of wildlife.

U.S. agencies are taking steps, such as raising awareness and training local authorities, to reduce demand and improve law enforcement, but disagreements over roles and responsibilities in Southeast Asia have hindered some efforts.

We recommended that USAID and the Departments of State and Interior clarify roles and responsibilities of staff in the region.

Examples of Wildlife Products Seized by the U.S. Fish and Wildlife Service in Miami 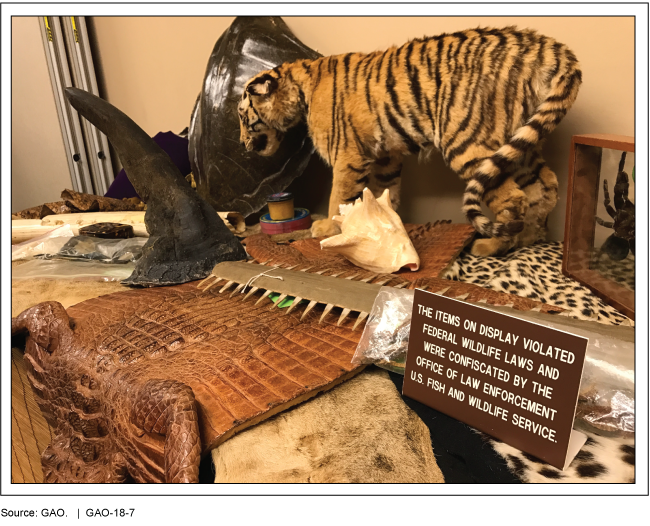 Photo of a turtle shell, animal skins, rhino horn and other products in a display with a sign explaining they were confiscated.

In the United States, China, and countries in Southeast Asia, there is diverse demand for illegally traded wildlife, according to data, reports, and various officials. The Department of the Interior's (Interior) U.S. Fish and Wildlife Service (FWS) has seized a variety of wildlife at U.S. ports, such as coral for aquariums, conch meat for food, seahorses for medicinal purposes, and crocodile skin for fashion items. In China and Southeast Asian countries, reports and officials have identified seizures and consumption of illegally traded wildlife products such as rhino horn, elephant ivory, pangolins (shown below), turtles, and sharks, among others, used for purposes such as food, decoration, pets, or traditional medicine.

U.S. agencies are taking actions designed to reduce demand for illegal wildlife, including building law enforcement capacity and raising awareness, but disagreement on roles and responsibilities has hindered some combating wildlife trafficking (CWT) activities in Southeast Asia. FWS inspects shipments in the United States and facilitates law enforcement capacity building with partner nations overseas. The Department of State (State) conducts diplomatic efforts, some of which contributed to a joint announcement by China and the United States to implement restrictions on both countries' domestic ivory trade. The U.S. Agency for International Development (USAID) works with local organizations abroad to support programs intended to reduce wildlife demand, strengthen regional cooperation, and increase law enforcement capacity. Several other agencies also contribute expertise or resources to support various demand reduction activities. Certain practices can enhance and sustain collaborative efforts, such as establishing joint strategies, defining a common outcome, and agreeing on roles and responsibilities. GAO found that agencies applied the first two practices but could improve with regard to agreement on roles and responsibilities in Southeast Asia. For example, although the National Strategy for Combating Wildlife Trafficking Implementation Plan designates various Task Force agencies to lead or participate in achieving CWT strategic priorities, it does not define specific roles and responsibilities at the working level. Agencies have different views on roles and responsibilities in Southeast Asia. According to some officials, this disagreement resulted in inappropriate training activities and hindered U.S. cooperation with a host nation. More clearly defining roles and responsibilities would enhance agency collaboration.

Wildlife trafficking—illegal trade in wildlife—is estimated to be worth $7 billion to $23 billion annually and, according to State, continues to push some protected and endangered animal species to the brink of extinction. In 2013, President Obama issued an executive order that established an interagency Task Force charged with developing a strategy to guide U.S. efforts to combat wildlife trafficking.