Under the Affordable Care Act, people purchasing insurance through an exchange can re-enroll each year. If they don't select a plan, they're automatically re-enrolled in their existing plan or a similar one, if available. In 2016, 30% of re-enrollments were automatic.

We examined whether automatic re-enrollment could have unintended financial consequences for consumers. We found that, from 2015 to 2016, the median monthly premium increase for those who were automatically re-enrolled, after tax credits, was $22; for those who actively re-enrolled, the increase was $5, partly because they may have switched to less expensive plans. 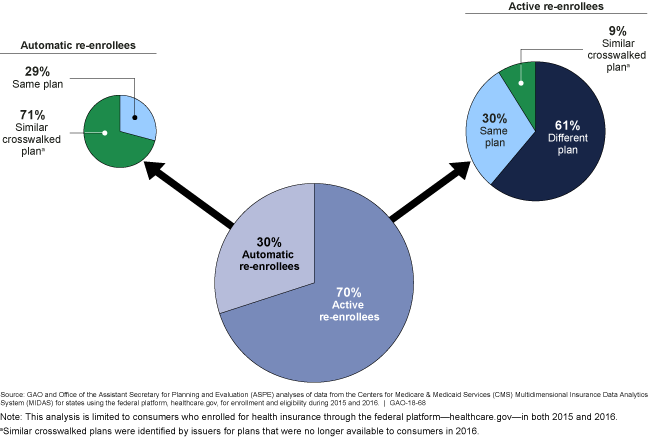 Graphic showing percentages of active and automatic re-enrollees and their insurance plans.

Through the exchanges established under the Patient Protection and Affordable Care Act, consumers can directly compare and select among health plans based on a variety of factors, including premiums. Most consumers who purchase health plans through the exchanges receive tax credits to help them pay for their premiums. The value of a consumer's premium tax credit is based, in part, on the premium for the benchmark plan, which is the second lowest cost option available in the consumer's local area within the exchange's silver metal tier (one of four metal tiers that indicate the value of plans). Because plan premiums and plan availability can change over time, the benchmark plan in each local market can also change over time. GAO analyzed changes in benchmark plans and premiums from 2015 through 2017 and found:

During the annual open enrollment period, consumers who do not make an active plan selection are automatically reenrolled into their existing plan or, if that plan is no longer available, they are generally re-enrolled into a similar plan if one has been identified. GAO analyzed information from the Office of the Assistant Secretary for Planning and Evaluation (ASPE) for consumers enrolled in both 2015 and 2016 and found:

During open enrollment, eligible returning consumers may re-enroll in their existing health insurance exchange plan or choose a different plan. Those who do not actively enroll in a plan may be automatically reenrolled into a plan. According to the Department of Health and Human Services, automatic re-enrollment is intended to help ensure consumers' continuity in coverage. However, some have questioned whether automatic reenrollment could have unintended financial consequences for consumers.

GAO reviewed relevant guidance and analyzed county-based data from the Centers for Medicare & Medicaid Services (CMS) for the 37 states that used the federal information platform, healthcare.gov, from 2015 through 2017. GAO also interviewed CMS and ASPE officials and analyzed information from ASPE on reenrollment from 2015 to 2016.