Over 42,000 people died from opioid overdoses in 2016, according to the Department of Health and Human Services (HHS). Partly due to this, HHS declared the opioid crisis a public health emergency on October 26, 2017. This declaration allows HHS some leeway to conduct certain activities in response to the opioid crisis.

For example, we found that HHS waived the public notice period for approval of two state Medicaid demonstration projects related to treatments for substance use disorders to speed up implementation of these projects. These demonstrations allow states to test and evaluate new approaches for delivering services within Medicaid. 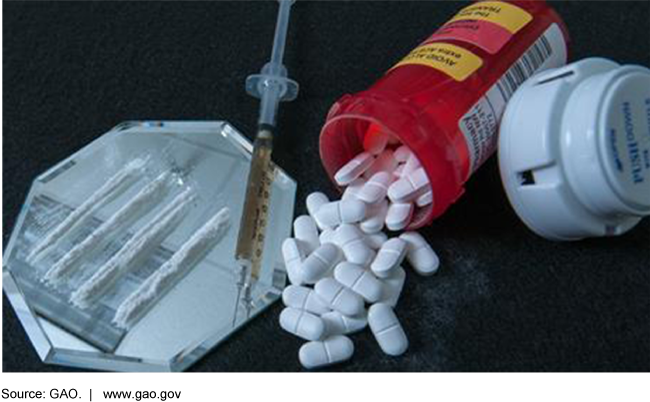 Photo showing pills spilling out of a prescription bottle next to a syringe and lines of white powder.

A public health emergency triggers the availability of certain authorities under federal law that allow the federal government to take actions such as waiving certain administrative requirements that may enhance or supplement other federal efforts. The federal government has launched a number of other initiatives to address the opioid crisis, and HHS issued an Opioid Strategy in April 2017 to guide the department's efforts.

The federal government has used 3 available authorities since declaring the public health emergency for the opioid crisis. First, HHS used a Paperwork Reduction Act waiver authority that, according to HHS officials, allowed the agency to quickly field a survey of more than 13,000 providers to assess prescribing trends for a medication used to treat opioid use disorder and any barriers to prescribing it. As of April 2018, officials reported receiving over 5,000 responses and told GAO the results of the survey will inform policy and programmatic decisions related to increasing access to treatment. Second, HHS used an authority to waive the public notice period for approval of two state Medicaid demonstration projects related to substance use disorder treatment, which was intended to speed up implementation of the projects. These demonstrations allow states to test and evaluate new approaches for delivering services in the Medicaid program, which finances health care coverage for low-income and medically needy populations. Third, HHS took steps to expedite support for research on opioid use disorder treatments and to disseminate information on opioid misuse and addiction, as required by another authority.

GAO provided a draft of this report to HHS, the Department of Justice (Justice), and the Department of Labor (Labor) for comment. HHS and Labor provided technical comments, which we incorporated as appropriate. Justice told us that they did not have any comments.

Opioid misuse and related deaths are a serious, growing public health problem in the United States. According to HHS's Centers for Disease Control and Prevention (CDC), over 42,000 people died from opioid-involved overdoses in 2016. On October 26, 2017, the Acting Secretary of HHS declared the opioid crisis a public health emergency under section 319 of the Public Health Service Act--the first time such a declaration has been made for opioids.