Many state and local crime labs across the country have backlogs of requests for DNA analysis of crime scene evidence.

Since 2011, the Department of Justice has awarded nearly $500 million to states and localities through a grant program to help reduce DNA evidence backlogs.

This testimony covers preliminary observations and analyses from our ongoing review of the program. For example, we found that backlogs are growing as several factors increase demand for DNA analysis. Also, labs may not have the resources to keep up with demand. 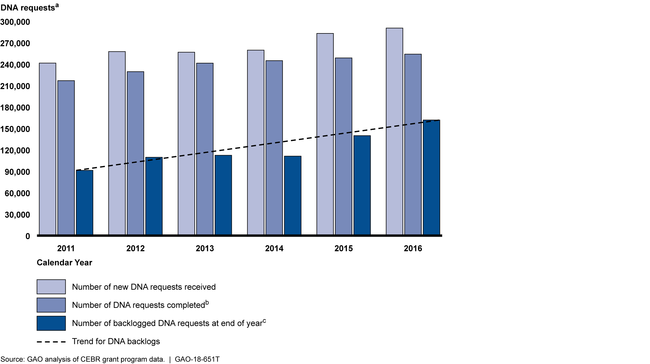 GAO's preliminary analysis found that, among the Department of Justice's (DOJ) DNA Capacity Enhancement and Backlog Reduction Program (CEBR) grantees (state and local entities with forensic crime labs), the reported aggregated backlog of crime scene DNA analysis requests has increased by 77 percent from 2011-2016. The growth in this reported aggregate backlog is the result of labs receiving more requests than they were able to complete, although they were receiving and completing more requests, as shown in the figure below.

aBy “DNA requests” we mean requests for biology screening and/or DNA testing such that if a request requires one or both, it is counted once.

cThe National Institute of Justice defines a “backlogged” request for crime scene DNA analysis as a request that has not been completed within 30 days of receipt in the laboratory. In the figure above, backlogs are bigger than the difference between the number of new requests and the number of requests completed because backlogs also include outstanding requests from previous years.

GAO's preliminary analysis also found that the National Institute of Justice (NIJ)—the component within DOJ's Office of Justice Programs (OJP) that is responsible for administering CEBR grants—has not defined CEBR program-wide goals in clear, specific, and measurable terms. Additionally, GAO's ongoing work identified statements in NIJ and CEBR program documentation that communicated program-wide goals, but the documentation did not consistently identify the same goals or cite the same number of goals. GAO continues to evaluate CEBR program goals and is in the process of evaluating related CEBR performance measures as part of its ongoing work.

GAO's preliminary analysis found that OJP has some controls to implement federal requirements associated with conflicts of interest and lobbying that apply to both OJP CEBR grant administrators as well as recipients of CEBR grant funding, but OJP has not fully established all appropriate controls related to lobbying.

Many state and local crime labs have backlogs of requests for DNA analysis of crime scene evidence, as reported by grantees participating in DOJ's CEBR grant program. These backlogs can include sexual assault kits. Since 2011, DOJ's Office of Justice Programs—the primary grant-making arm of DOJ—has awarded nearly $500 million to states and local jurisdictions through the CEBR grant program to help reduce DNA evidence awaiting analysis at crime labs. There have been concerns that these backlogs of unanalyzed evidence have enabled serial offenders to reoffend or have delayed justice.

This statement is based on preliminary observations and analyses from GAO's ongoing review of (1) the level of crime scene DNA evidence backlogs among CEBR grantees and the factors that contribute to such backlogs; (2) the extent to which DOJ has clearly defined goals for CEBR; and (3) the extent to which OJP has controls for CEBR related to federal conflicts of interest and lobbying requirements. To develop these preliminary findings, GAO reviewed CEBR grantee data from 2011-2016 (the latest data available) and studies relevant to the DNA backlog, visited selected labs, and interviewed DOJ officials, among others.

GAO is not making recommendations in this testimony but will consider them, as appropriate, as it finalizes its work.