People who need long-term services to help with routine daily activities, such as bathing and eating, often prefer to remain in their homes and communities rather than receive care in nursing homes or other institutions. State Medicaid programs must cover nursing home care, but can choose to cover most home- and community-based care—and they’re increasingly opting to do so.

States have faced challenges in providing these services, however, including finding and keeping home care workers, due to the low wages for these services. We found that states have made efforts to respond to these challenges. 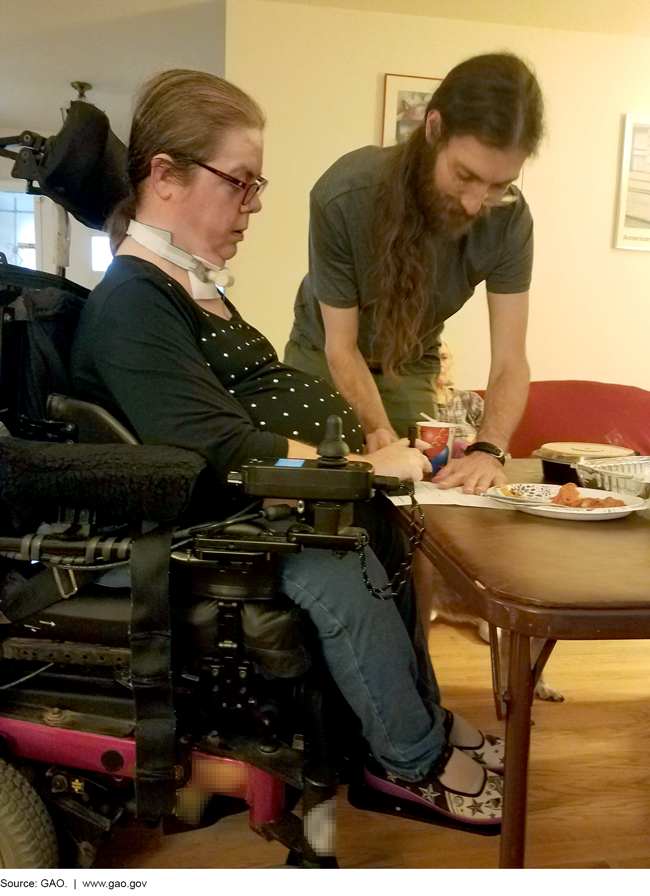 Photo of a woman in a wheelchair and a man at a table.

All state Medicaid programs finance coverage of long-term services and supports (LTSS), which help beneficiaries with physical, cognitive, or other limitations perform routine daily activities, such as eating, dressing, and making meals. When these services are provided in beneficiaries' homes or other community settings instead of nursing homes, the services are known as home- and community-based services (HCBS). The structure of the 26 HCBS programs we reviewed in five states—Arizona, Florida, Mississippi, Montana, and Oregon—reflected decisions about which populations to cover, whether to limit eligibility or enrollment, and whether to use managed care.

Eligibility: All five states had at least one HCBS program that limited eligibility to beneficiaries whose needs would otherwise require care in a nursing home or other institutional setting.

Enrollment: Four of the five states limited enrollment in one or more of their HCBS programs; 19 of the 26 programs had enrollment caps, and 12 of these programs maintained a waiting list.

Managed care: Two of the five states used managed care to provide HCBS, paying managed care organizations (MCO) a fixed fee for each beneficiary rather than paying providers for each service delivered.

State and MCO officials identified several challenges providing HCBS and described their efforts to respond to them:

HCBS funding: State officials reported that limitations on overall HCBS funding levels posed a challenge, which they responded to by providing their state legislatures with information on the projected need for HCBS to inform future funding decisions, and leveraging other available resources, such as federal grants.

The need for LTSS to assist individuals with limited abilities for self-care is expected to increase, in part due to the aging of the population. Medicaid is the nation's primary payer of LTSS, with spending estimated at $167 billion in 2016. State Medicaid programs are generally required to cover LTSS provided in institutions, such as nursing homes, but coverage of the same services outside of institutions—that is, HCBS—is generally optional. In recent years there have been efforts to shift the balance of LTSS away from institutions through the expanded use of HCBS. National spending for HCBS has increased and now exceeds that for services in an institution. However, the extent to which Medicaid programs cover HCBS varies by state, as does the structure of states' HCBS programs.

GAO was asked to review the approaches states use to provide coverage for HCBS in the Medicaid program. For selected states, this report describes (1) decisions that influenced the structure of Medicaid HCBS programs, and (2) challenges providing HCBS to Medicaid beneficiaries and efforts to respond to these challenges. GAO reviewed information and conducted interviews with officials from a nongeneralizable sample of five states, which GAO selected to obtain variation in the percentage of total Medicaid LTSS expenditures used for HCBS, geography, and other factors. GAO also reviewed information and interviewed officials from four MCOs—two in each of the two selected states that used managed care to provide HCBS. The MCOs varied in enrollment size and population served.