Fossil fuels—coal, oil, and natural gas—will likely continue to be the major source of U.S. energy. The Department of Energy funds research and development (R&D) for innovative fossil fuel technologies.

In the period we reviewed, the department provided $2.66 billion for 794 such projects. Among other things, we found:

42% of the funding ($1.12 billion) went to 9 later-stage demonstration projects on carbon capture and storage technologies, which could reduce greenhouse gas emissions. Of the 9 projects, 6 used coal and 3 used other fuels. 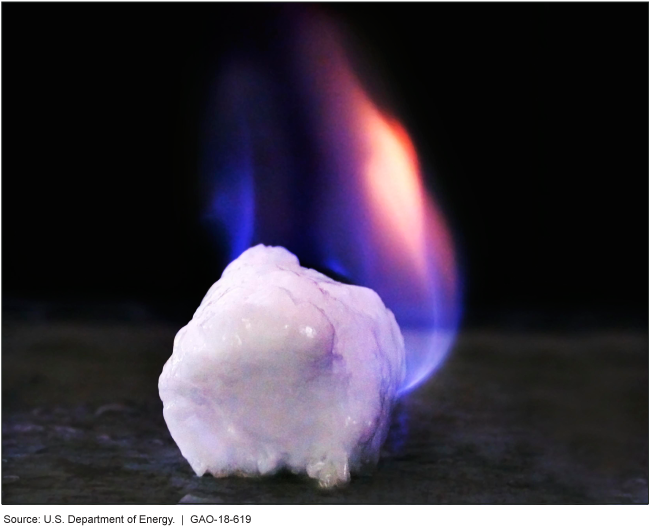 Photo of a white substance on fire.

The Department of Energy (DOE) provided $2.66 billion in funding, or obligations, for 794 research and development (R&D) projects started from fiscal years 2010 through 2017 to develop advanced fossil energy technologies. Such technologies include processes for converting coal into synthesis gas composed primarily of carbon monoxide and hydrogen, and recovering methane from gas hydrates. Of the $2.66 billion, DOE provided $1.12 billion in funding for 9 later-stage, large demonstration projects, which were to assess the readiness for commercial viability of carbon capture and storage (CCS) technologies. CCS involves capturing man-made carbon dioxide at its source and storing it permanently underground. DOE provided the remaining $1.54 billion in funding for 785 other projects in amounts that were relatively small—over half were for less than $1 million.

Six demonstration projects researched CCS technologies using coal, while three used other fuels. The nine demonstration projects received funding ranging from $13 million to $284 million. As shown in the figure, three projects implementing CCS technologies were active as of the end of fiscal year 2017. Also, DOE withdrew its support for four projects, and two projects were withdrawn by the recipients—all before completion. These projects did not reach completion due to several factors, such as a lack of technical progress, or changes in the relative prices of coal and natural gas that made the projects economically unviable.

Note: Of the 794 R&D projects, 9 large demonstration projects supported carbon capture and storage technologies to assess their readiness for commercial viability. Advanced fossil energy projects include research on innovative coal, natural gas, and oil technologies. For purposes of this report, GAO used the term funding to mean obligations. Funding amounts may not sum due to rounding.

One aspect of DOE's mission is to secure U.S. leadership in energy technologies. To that end, DOE funds R&D for energy projects, including for advanced fossil energy (innovative technologies for coal, natural gas, and oil). DOE provides funding for R&D projects, including large projects designed to demonstrate the commercial viability of technologies. Also, DOE is authorized to make loan guarantees to support certain energy projects through its Loan Guarantee Program, which is administered by its Loan Programs Office.

GAO was asked to review DOE's funding for advanced fossil energy projects. This report describes DOE's funding for advanced fossil energy R&D projects started from fiscal years 2010 through 2017 and the types of projects and recipients that received funding, among other objectives. For purposes of this report, GAO used the term funding to mean obligations.