Over 20 U.S. diplomats and family members in Havana, Cuba, have suffered injuries—including brain damage—believed to be connected to unexplained incidents starting in 2016. A similar incident has also been reported in Guangzhou, China.

After incidents involving serious injury, the State Department is generally required to convene an Accountability Review Board (ARB) to assess State's response and improve security at diplomatic posts.

However, the State office responsible for convening ARBs learned of the incidents in Cuba from media reports, months after they began. We recommended improving internal communication about such incidents. 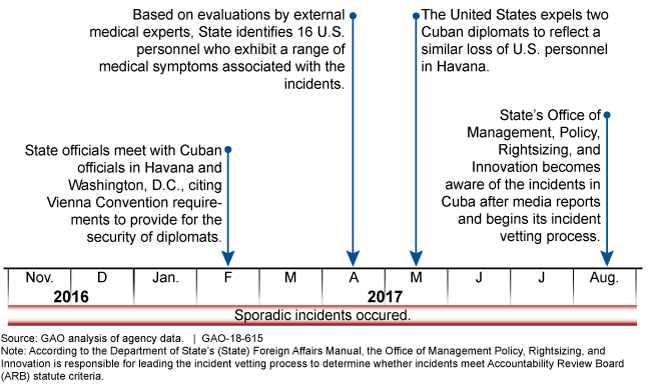 The Department of State's (State) Accountability Review Board (ARB) policy does not ensure that the responsible office—State's Office of Management Policy, Rightsizing, and Innovation (M/PRI)—is made aware of incidents that may meet the ARB statute criteria, such as those that occurred in Cuba and were associated with injuries to U.S. personnel. According to State policy, as soon as M/PRI becomes aware of potentially qualifying incidents, M/PRI will start the process for considering whether the incident warrants an ARB. M/PRI relies on informal communication to identify potentially qualifying incidents to begin the vetting process because State does not have a policy, procedure, or process for internal communication of such incidents to M/PRI, according to State officials and GAO analysis. As illustrated in the figure below, other State entities began responding to the incidents in early 2017, but M/PRI was not made aware of the incidents until mid-August 2017, when a former M/PRI official contacted the office after seeing media reports. If M/PRI is not aware of incidents, it cannot initiate State's ARB incident vetting process. This situation puts State at risk of not meeting statutory time frames for convening an ARB and could result in State being less able to improve security programs and practices at other U.S. diplomatic posts. Standards for Internal Control in the Federal Government call for internal communication to achieve the entity's objectives and note that management should document responsibilities through policy. 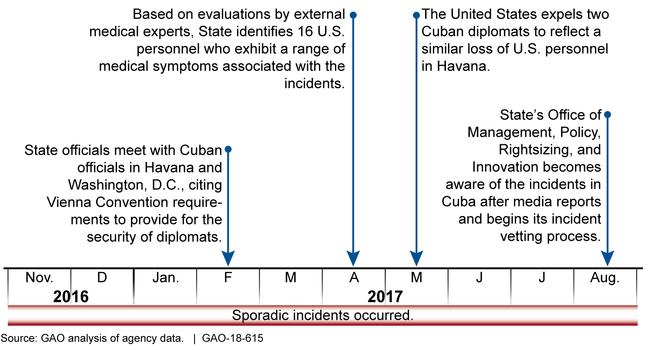 Note: According to the Department of State's (State) Foreign Affairs Manual, the Office of Management Policy, Rightsizing, and Innovation is responsible for leading the incident vetting process to determine whether incidents meet Accountability Review Board (ARB) statute criteria.

U.S. diplomats and their families in Havana, Cuba, were affected by incidents that were associated with injuries, including hearing loss and brain damage. Over State has reported that over 20 U.S. diplomats and family members in Havana have suffered from medical conditions believed to be connected to the incidents, which began in late 2016 and have continued into 2017. By law, State is generally required to convene an ARB within 1260 days of incidents that result in serious injury at, or related to, a U.S. mission abroad, but the Secretary of State can determine that a 60 day extension is necessary. According to State's policy, M/PRI is responsible for initiating and leading State's ARB incident vetting process.

This report is part of a broader request to review State's response to the incidents in Cuba. In this report, GAO examines the extent to which State's ARB policy ensures that M/PRI is made aware of incidents that may meet the ARB statute criteria. GAO analyzed relevant federal laws, State policies, and other State documents. GAO also interviewed cognizant State officials.

GAO recommends that State revise its policies to define responsibilities for internal communication to M/PRI of relevant incidents. State concurred with GAO’s recommendation.