Some sunscreen active ingredients are not used in products marketed in the United States, although they have been available in other countries for more than a decade. Companies that manufacture some of these sunscreen ingredients have sought to bring them to the U.S. market by submitting applications to FDA between 2002 and 2009.

We looked at the status of the applications and found that, as of August 2017, all remain pending after FDA determined that more data are needed to determine that the ingredients are safe and effective. Some of the companies questioned FDA’s requests for more data, and no additional data have been provided. 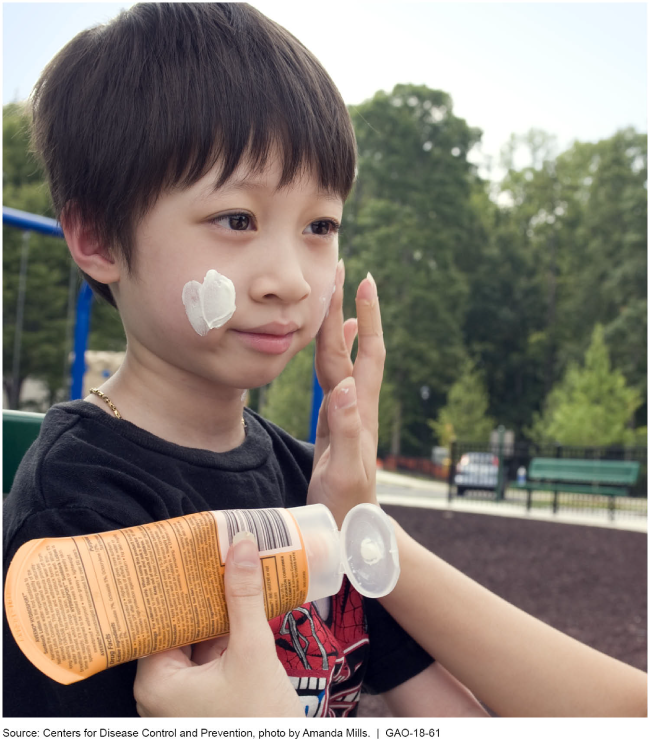 Picture of sunscreen being applied to a child.

The Food and Drug Administration (FDA), within the Department of Health and Human Services, implemented requirements for reviewing applications for sunscreen active ingredients within time frames set by the Sunscreen Innovation Act, which was enacted in November 2014. For example, the agency issued a guidance document on safety and effectiveness testing in November 2016.

As of August 2017, all applications for sunscreen active ingredients remain pending after the agency determined more safety and effectiveness data are needed. By February 2015, FDA completed its initial review of the safety and effectiveness data for each of the eight pending applications, as required by the act. FDA concluded that additional data are needed to determine that the ingredients are generally recognized as safe and effective (GRASE), which is needed so that products using the ingredients can subsequently be marketed in the United States without FDA's premarket approval. To make a GRASE determination, FDA requested that the application sponsors provide additional data, including human clinical studies, animal studies, and efficacy studies.

Sponsors of some of the sunscreen applications and some stakeholders GAO interviewed questioned FDA's requests, stating, for example, that the agency's recommended absorption test has never been conducted on sunscreen ingredients and there is a lack of knowledge on how to conduct it. At the same time, other stakeholders support the additional testing FDA requested. FDA reports that the increase in the amount and frequency of sunscreen usage, coupled with advances in scientific understanding and safety evaluation methods, has informed the agency's perspective that it needs additional data to determine that sunscreen active ingredients are GRASE. However, none of the sponsors reported current plans to provide the requested information—that is, they are either still considering whether to conduct the additional tests or they do not plan to do so. They cited the following reasons:

The Sunscreen Innovation Act includes a provision for GAO to examine FDA's implementation of the act. This report examines (1) the extent to which FDA implemented requirements for reviewing applications for sunscreen active ingredients within mandated time frames, and (2) the status of the sunscreen applications. GAO reviewed FDA regulations and guidance documents, Federal Register notices, and FDA and sponsor documents for all eight sunscreen applications. GAO also interviewed FDA officials; sponsors of sunscreen applications; and stakeholders with interests in sunscreen, including health care providers, researchers, and industry groups. Stakeholders were selected based on knowledge of the monograph process and sunscreen active ingredients. The perspectives of these stakeholders are not generalizable.