The Medicaid program helped provide health care to an estimated 73 million people in fiscal 2017 at a cost of about $596 billion. This joint federal and state program continues to grow, and remains on our high risk list due to concerns about the adequacy of federal oversight and the program's vulnerability to fraud.

This testimony focuses on the major risks to the integrity of Medicaid. Efforts needed to strengthen oversight include:

expansion of a national Medicaid data system that will allow comparisons across states, 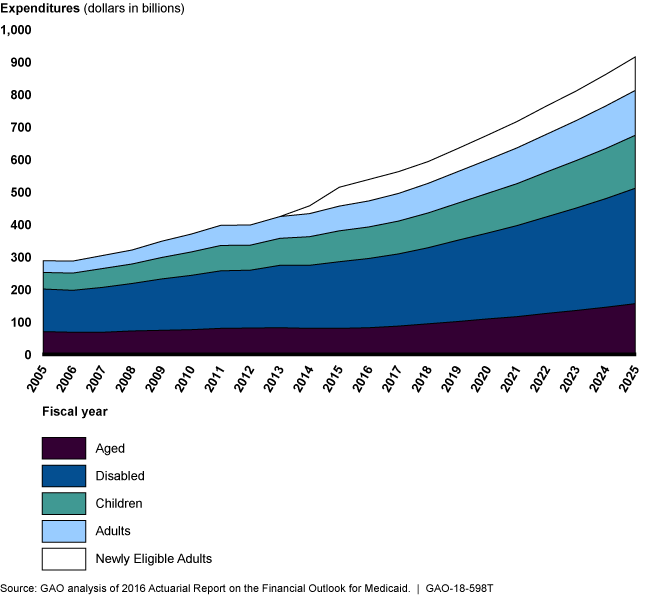 The number of recipients is growing. The 5 groups are the aged, disabled, children, adults, and newly eligible adults.

1) Improper payments, including payments made for services not actually provided. Regarding managed care payments, which were nearly half (or $280 billion) of Medicaid spending in fiscal year 2017, GAO has found that the full extent of program risk due to overpayments and unallowable costs is unknown.

3) Demonstrations, which allow states to test new approaches to coverage. Comprising about one-third of total Medicaid expenditures in fiscal year 2015, GAO has found that demonstrations have increased federal costs without providing results that can be used to inform policy decisions.

Medicaid, a joint federal-state health care program overseen by CMS, is a significant component of federal and state budgets, with total estimated expenditures of $596 billion in fiscal year 2017.

As a part of this body of work, GAO has made 83 recommendations to address shortcomings in Medicaid oversight and suggested four matters for congressional consideration. The Department of Health and Human Services and CMS have generally agreed with these recommendations and have implemented 25 of them. GAO will continue to monitor implementation of the remaining recommendations.