Federal reports on Native American youth found challenges—such as poverty and exposure to violence—that can make them susceptible to being arrested, charged, or sentenced in the justice system.

Among other things, we found:

While most of the Native American youth in the system were at the state or local level, they were overrepresented in the federal system—likely due to federal jurisdiction on tribal lands. 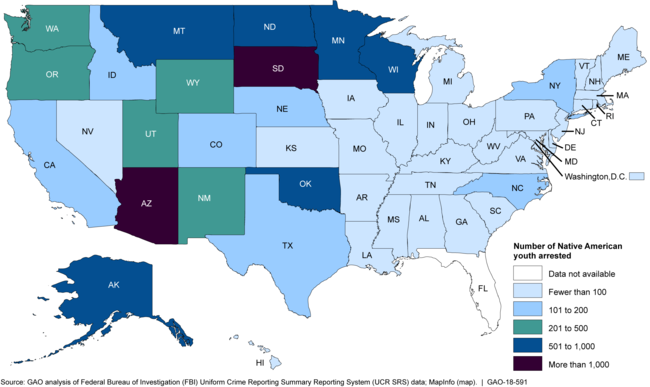 Note: Both data sources use the race category “American Indian or Alaskan Native” but define it differently. Race information is based on various methods including self-identification and documentation. Federal data include youth in federal custody after a federal arrest and may not capture all arrests by federal law enforcement agencies.

This report examines (1) what available data show about the number and characteristics of Native American youth in federal, state and local, and tribal justice systems; and (2) federal discretionary grant programs that could help prevent or address delinquency among Native American youth, and tribal government and Native American organizations' access to those grants. GAO analyzed federal, state and local, and tribal arrest, adjudication, and confinement data from 2010 through 2016 (the most recent available) from DOJ and the Department of the Interior. GAO also analyzed DOJ and HHS grant program award documentation from fiscal years 2015 through 2017, and application information for a sample of the grant programs chosen based on the amount of funding awarded and other factors. GAO also interviewed officials from DOJ, HHS, and 10 tribal governments or Native American organizations chosen to include successful and unsuccessful applicants to the grant programs, among other things.