DOD’s Military Health System allows patients to use military or civilian health care providers. We examined the measures DOD's leadership reviews to assess providers' quality of care across its health system and found that DOD:

is not using common measures across all providers;

uses measures covering a limited range of medical conditions; and

hasn’t created consistent standards and requirements related to providers' performance on the measures.

We recommended that, for all providers, DOD use common key quality measures, expand their range, and develop consistent performance standards and requirements. 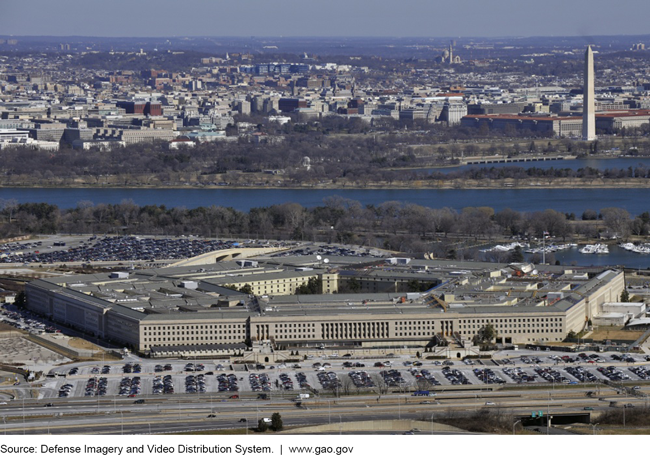 Picture of the Department of Defense at the Pentagon

The National Defense Authorization Act for fiscal year 2016 (NDAA 2016) directed the Department of Defense (DOD) to align its measures of health care quality used in the Military Health System (MHS) to improve beneficiary experience and reduce variation in the quality of care. GAO reviewed the quality measures DOD identified in March 2017 in response to the NDAA 2016; DOD senior leadership tracks these measures on dashboards to gauge progress on MHS strategic goals. GAO found that DOD does not use a common set of measures on its dashboards to assess the quality of care provided by either military hospitals and clinics—known as direct care—or networks of civilian hospitals and other providers, known as purchased care. (See figure.) As a result, DOD's senior leadership has limited information on the extent to which MHS beneficiaries receive consistently high quality care across the MHS.

Furthermore, for both direct and purchased care, DOD uses measures on its dashboards that track a limited range of quality care areas and medical conditions compared to the measures adopted by Medicare and by private health insurers. For example, whereas civilian hospitals report to Medicare information on 11 measures of patients' self-reported experience in hospitals, Military hospitals report only 1 such measure. By using a limited range of quality measures, DOD may not detect key quality issues. Further, when selecting quality measures, the MHS does not prioritize using common measures across direct and purchased care or expanding the range of measures it uses.

The National Defense Authorization Act for fiscal year 2016 contains provisions for GAO to review DOD's plans to (1) improve the experience of beneficiaries who receive care through military hospitals and clinics or from civilian providers and (2) reduce variation in the quality of care.

In this report, GAO examines (1) measures DOD uses to assess the quality of direct and purchased care, and (2) the extent to which DOD has established performance standards related to the measures and corrective action requirements for providers who do not meet those standards.

GAO reviewed the measures in DOD's Core Dashboard for direct care and Purchased Care Dashboard for purchased care. It also reviewed DOD documents and reports to Congress, and interviewed MHS officials, including officials from the Army, Navy, and Air Force. GAO also compared the quality measures DOD uses to those used in Medicare and by private insurers, which have been vetted by multiple stakeholders. GAO assessed DOD's use of performance standards and corrective action requirements in the context of federal internal control standards.