About 8.7 million people bought insurance in 2018 through the federal website (healthcare.gov), 5% less than in 2017.

Health and Human Services reduced its advertising and other consumer outreach. The 23 stakeholders we interviewed had mixed views about the effects of these reductions on enrollment.

HHS did not set enrollment targets for 2018, but reported meeting its goal of enhancing specific aspects of consumer experience.

We recommended that HHS take steps to better manage its performance. 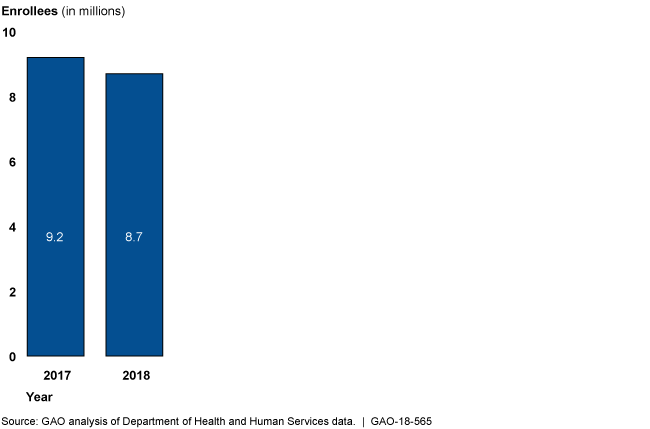 About 8.7 million consumers in 39 states enrolled in individual market health insurance plans offered on the exchanges through healthcare.gov during the open enrollment period for 2018 coverage. This was 5 percent less than the 9.2 million who enrolled for 2017 and continued a decline in enrollment from a peak of 9.6 million in 2016. Among the 23 stakeholders we interviewed representing a range of perspectives, most reported that plan affordability played a major role in exchange enrollment—both attracting and detracting from enrollment. In 2018, total premiums increased more than expected, and, as a result, plans may have been less affordable for consumers, which likely detracted from enrollment. However, most consumers receive tax credits to reduce their premiums, and stakeholders reported that plans were often more affordable for these consumers because higher premiums resulted in larger tax credits, which likely aided exchange enrollment. Stakeholders had mixed opinions on the effects that other factors, such as the impact of reductions in federal advertising and the shortened open enrollment period, might have had on enrollment.

The Department of Health and Human Services (HHS), which manages healthcare.gov enrollment, reduced consumer outreach for the 2018 open enrollment period:

HHS spent 90 percent less on its advertising for 2018 ($10 million) compared to 2017 ($100 million). Officials told us that the agency's approach for 2018 was to focus on low-cost, high-performing forms of advertising.

HHS reduced funding by 42 percent for navigator organizations—which provide in-person enrollment assistance for consumers—spending $37 million in 2018 compared to $63 million in 2017 due to a shift in administration priorities. HHS allocated the funding using data that it acknowledged were not reliable in December 2016. The lack of quality data may affect HHS's ability to effectively manage the navigator program.

Since 2014, millions of consumers have purchased health insurance from the exchanges established by the Patient Protection and Affordable Care Act. Consumers can enroll in coverage during an annual open enrollment period. HHS and others conduct outreach during this period to encourage enrollment and ensure the exchanges' long-term stability. HHS announced changes to its 2018 outreach, prompting concerns that fewer could enroll, potentially harming the exchanges' stability.

GAO was asked to examine outreach and enrollment for the exchanges using healthcare.gov. This report addresses (1) 2018 open enrollment outcomes and any factors that may have affected these outcomes, (2) HHS's outreach efforts for 2018, and (3) HHS's 2018 enrollment goals. GAO reviewed HHS documents and data on 2018 open enrollment results and outreach. GAO also interviewed officials from HHS and 23 stakeholders representing a range of perspectives, including those from 4 navigator organizations, 3 issuers, and 6 insurance departments, to obtain their non-generalizable views on factors that likely affected 2018 enrollment.

GAO is making three recommendations to HHS, including that it ensure the data it uses for determining navigator organization awards are accurate, set numeric enrollment targets, and assess other aspects of the consumer experience. HHS agreed with two recommendations, but disagreed with the need to set numeric targets. GAO maintains that such action is important.