CMS reviewers have saved over $5 billion in the past 4 years by identifying errors in state spending reports—finding expenditures that lacked supporting data or were not allowed under Medicaid rules.

Could they be finding more? CMS may be missing chances to save because of how it targets its reviews. For example, CMS has 1 staff member reviewing Arkansas reports and only 2.2 staff reviewing California, which spends 15 times as much. Our recommendations address this and other issues we found. 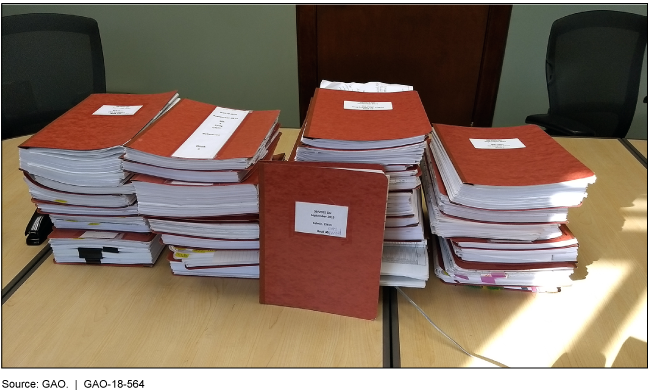 Photo of dozens of binders piled on a desk

The Centers for Medicare & Medicaid Services (CMS), which oversees Medicaid, has various review processes in place to assure that expenditures reported by states are supported and consistent with Medicaid requirements. The agency also has processes to review that the correct federal matching rates were applied to expenditures receiving a higher than standard federal matching rate, which can include certain types of services and populations. These processes collectively have had a considerable federal financial benefit, with CMS resolving errors that reduced federal spending by over $5.1 billion in fiscal years 2014 through 2017.

However, GAO identified weaknesses in how CMS targets its resources to address risks when reviewing whether expenditures are supported and consistent with requirements.

CMS cancelled in-depth financial management reviews in 17 out of 51 instances over the last 5 years. These reviews target expenditures considered by CMS to be at risk of not meeting program requirements.

CMS told GAO that resource constraints contributed to both weaknesses. However, the agency has not completed a comprehensive assessment of risk to (1) determine whether oversight resources are adequate and (2) focus on the most significant areas of risk. Absent such an assessment, CMS is missing an opportunity to identify errors in reported expenditures that could result in substantial savings to the Medicaid program.

Internal guidance for examining variances in these expenditures was unclear, and not all reviewers in the three CMS regional offices GAO reviewed were investigating significant variances in quarter-to-quarter expenditures.

Review procedures for expenditures for individuals newly eligible for Medicaid under the Patient Protection and Affordable Care Act were not tailored to different risk levels among states. For example, in its reviews of a sample of claims for this population, CMS reviewed claims for the same number of enrollees—30—in California as for Arkansas, even though California had 10 times the number of newly eligible enrollees as Arkansas.

Without clear internal guidance and better targeting of risks in its review procedures for expenditures receiving higher matching rates, CMS may overpay states.

Medicaid has grown by over 50 percent over the last decade, with about $370 billion in federal spending in fiscal year 2017. CMS is responsible for assuring that expenditures—reported quarterly by states—are consistent with Medicaid requirements and matched with the correct amount of federal funds. CMS's review of reported expenditures has become increasingly complex due to variation in states' Medicaid programs and an increasing number of different matching rates.

GAO was asked to examine CMS's oversight of state-reported Medicaid expenditures. In this report, GAO examined how CMS assures that (1) expenditures are supported and consistent with requirements; and (2) the correct federal matching rates were applied to expenditures subject to a higher match. GAO also examined the financial impact of resolved errors. GAO reviewed documentation for the most recently completed quarterly reviews by 3 of CMS's 10 regional offices for six states that varied by Medicaid program expenditures and design. GAO also reviewed policies, procedures, and data on resolved errors; and interviewed CMS and state officials. GAO assessed CMS's oversight processes against federal standards for internal control.

GAO is making three recommendations, including that CMS improve its risk-based targeting of oversight efforts and resources, and clarify related internal guidance. The Department of Health and Human Services concurred with these recommendations.