The Strategic Petroleum Reserve, managed by the Department of Energy, exists to minimize the effects of disruptions in the supply of petroleum products. As of March 2018, it held about 665 million barrels of crude oil.

How big should the reserve be? A review by the Department didn't determine an optimal size and did not fully consider factors including

The role of reserves held by private companies

We recommended that the Department periodically reexamine the size of the reserve, among other things. 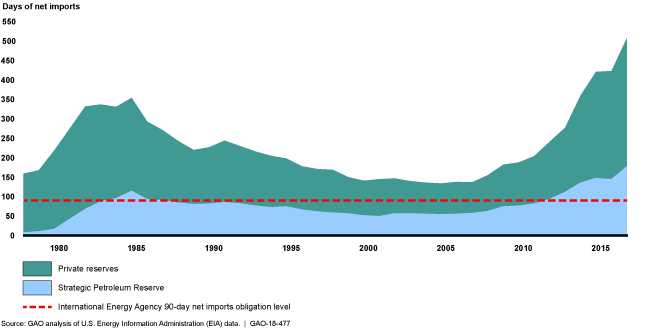 This graphic shows the proportions of private reserves and the Strategic Petroleum Reserve.

The Department of Energy (DOE) has not identified the optimal size of the Strategic Petroleum Reserve (SPR). In 2016, DOE completed a long-term strategic review of the SPR after its last comprehensive examination conducted in 2005. The 2016 review examined the benefits of several SPR sizes, but it did not identify an optimal size and its review was limited in several ways. In particular, DOE did not fully consider recent and expected future changes in market conditions, such as the implications of falling net imports, or the role that increased levels of private reserves (reserves held by private companies for their own purposes) may play in responding to supply disruptions. These changes have contributed to SPR and private reserves reaching historically high levels on a net imports basis (see figure). These changes are expected to continue to evolve—according to government projections, the United States will become a net exporter in the late 2020s before again becoming a net importer between 2040 and 2050. GAO has found that agencies should reexamine their programs if conditions change. Without addressing the limitations of its 2016 review and periodically performing reexaminations in the future, DOE cannot be assured that the SPR will be sized appropriately into the future.

DOE has taken steps to take into account congressionally mandated sales of SPR crude oil in its $1.4 billion modernization plans for SPR's infrastructure and facilities. The SPR is projected to hold 405 million barrels of oil by the end of fiscal year 2027. However, DOE's current plans are based on information analyzed prior to recently mandated sales. According to DOE officials, the agency began a study in March 2018 to assess the effects of these sales on the SPR's modernization. However, this study is not examining all options for handling any excess SPR assets that may be created by currently mandated sales or any additional sales that may be mandated in the future, inconsistent with an agency order on real property asset management that calls for identifying excess assets. For example, DOE does not plan to examine the potential to lease unused SPR storage capacity to the private sector because DOE is not currently authorized to enter into such leases, according to agency officials. If authorized, leasing capacity could generate revenues that could help offset the costs of modernization. By not examining a full range of options, DOE risks missing beneficial ways to modernize the SPR while saving taxpayer resources.

More than 4 decades ago, Congress authorized the creation of the SPR to reduce the impact of disruptions in supplies of petroleum products. DOE manages the SPR. As a member of the International Energy Agency, the United States is obligated to maintain reserves equivalent to at least 90 days of the previous year's net imports (imports minus exports). The SPR's storage and related infrastructure is aging, and DOE has plans to modernize these facilities. Since 2015, Congress has mandated crude oil sales. As of March 2018, the SPR held about 665 million barrels of crude oil.

GAO was asked to examine the SPR's ability to meet U.S. energy security needs. This report examines, among other things, the extent to which (1) DOE has identified the optimal size of the SPR, and (2) DOE's plans for modernizing the SPR take into account the effects of congressionally mandated crude oil sales. GAO reviewed DOE's plans and studies, and interviewed agency officials and nine experts selected based on prior work, referrals, and a literature review.

GAO is making four recommendations, including that DOE (1) supplement the 2016 review by conducting an additional analysis, (2) ensure that the agency periodically reexamines the size of the SPR, and (3) consider a full range of options for handling potentially excess assets as it conducts its study, among other things. DOE agreed with two, partially agreed with one, and disagreed with another recommendation on refined product reserve studies. GAO maintains that the recommendations are valid.