Federal agencies must treat research animals humanely in their quest to answer scientific questions. As a check on their practices, the agencies must submit data about their animal use to the Animal and Plant Health Inspection Service (APHIS) and the National Institutes of Health.

We also found that agencies may not accurately report their animal use to APHIS because of inadequate instructions. We recommended that APHIS improve its instructions. 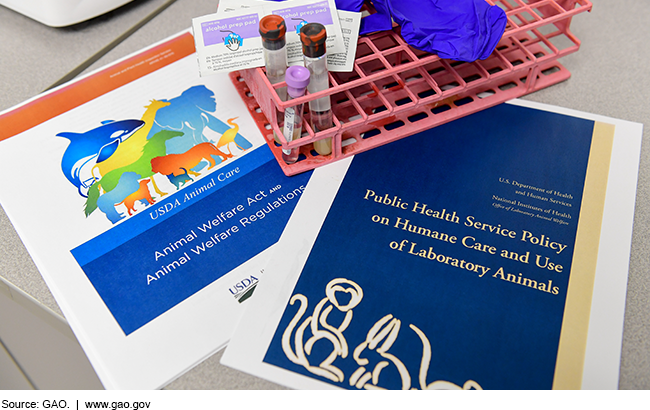 The Department of Health and Human Services' (HHS) National Institutes of Health (NIH) and the U.S. Department of Agriculture's (USDA) Animal and Plant Health Inspection Service (APHIS) have provided guidance to federal research facilities on what they must report about their animal use programs under the Health Research Extension Act and the Animal Welfare Act, respectively. Federal research facilities we reviewed met NIH's reporting instructions. However, APHIS's instructions have not ensured consistent and complete reporting in three areas: research with birds, activities outside the United States, and field studies outside a typical laboratory. By clarifying its instructions, APHIS could improve the quality of animal use data it receives from agencies.

APHIS and NIH voluntarily share some information about agencies' animal research with the public. In particular, APHIS posts to its website data on agencies' annual use of animals covered by the Animal Welfare Act, and NIH publicly posts a list of research facilities with approved animal use programs. However, APHIS does not describe potential limitations related to the accuracy and completeness of the data it shares as called for by USDA guidance. For example, APHIS does not explain that the data do not include birds used for activities that are covered by the Animal Welfare Act and may include field studies that are not covered by the act. APHIS could increase the data's usefulness to the public by making such disclosures.

Federal agencies may have additional information about their animal use programs, including data on vertebrate species used but not reported to APHIS; the purpose of research activities; and internal inspection reports. However, stakeholders GAO surveyed had different views on agencies' sharing such data with the public. Some stakeholders, particularly animal advocacy organizations, cited the need for more transparency and oversight while others, including federal agencies and research and science organizations, raised concerns about the additional administrative burden on agencies.

Research facilities, including those managed by federal agencies, use a wide range of animals in research and related activities each year. The Animal Welfare Act and the Health Research Extension Act have varying requirements for federal agencies and others to protect the welfare of and report on the use of different research animals to APHIS and NIH.

GAO was asked to review several issues related to animals used in federal research. This report examines (1) the extent to which APHIS and NIH have provided federal facilities with guidance for reporting their animal use programs, (2) the extent to which APHIS and NIH have shared agencies' animal use information with the public, and (3) stakeholder views on federal agencies' sharing additional information. GAO identified federal agencies that used vertebrate animals in research in fiscal years 2014 through 2016, reviewed their reports to APHIS and NIH, and examined publicly available data. GAO also surveyed a nongeneralizable sample of stakeholders from federal agencies and animal advocacy, research and science, and academic organizations.

Animal Research in the Federal Government: A Search for Alternatives