Armed groups in the Democratic Republic of the Congo have committed severe human rights abuses, including sexual violence, and reportedly profit from mining and trade in tungsten, gold and other "conflict minerals" found in the region.

In 2012, the Securities and Exchange Commission began requiring companies whose products may contain these minerals (from the DRC and neighboring countries) to report on their sources.

We found in 2017 that nearly all the companies required to report this information did so and that most reported difficulty determining the country of origin. We also identified 2 new surveys on sexual violence in the area. 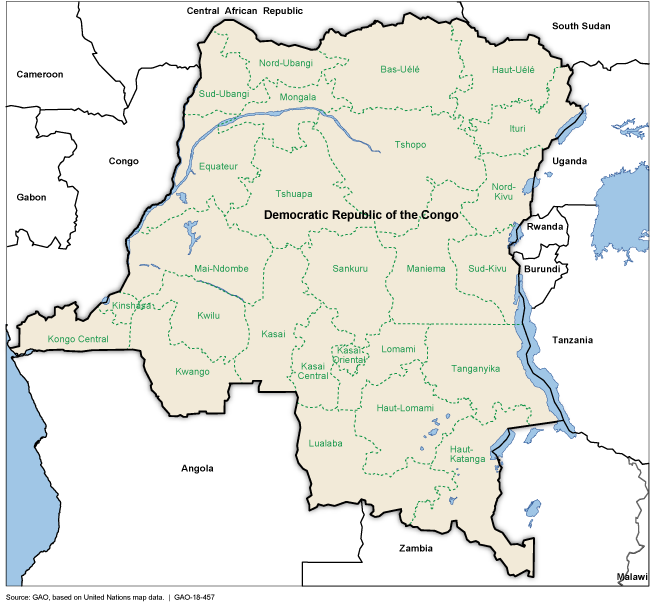 This is a map of the Democratic Republic of Congo.

GAO's review of companies' conflict minerals disclosures filed with the U.S. Securities and Exchange Commission (SEC) in 2017 found that, in general, they were similar to disclosures filed in the prior 2 years. In 2017, 1,165 companies filed conflict minerals disclosures—about the same as in 2016 and 2015. Percentages of companies reporting country-of-origin inquiries in 2017 were also similar to the percentages from those 2 prior years. As a result of the inquiries they conducted, an estimated 53 percent of companies reported in 2017 whether the conflict minerals in their products came from the Democratic Republic of the Congo (DRC) and adjoining countries—similar to the estimated 49 percent in 2016 and 2015 but significantly higher than the estimate of 30 percent in 2014 (see figure). In their 2017 disclosure reports, many companies described actions they took to improve data collection processes, and most companies indicated some challenges in determining the country of origin.

Company Determinations on Sources of Conflict Minerals, by Reporting Year 2014–2017

Similar to the prior 2 years, almost all companies required to conduct due diligence, as a result of their country-of-origin inquiries, reported doing so. After conducting due diligence to determine the source and chain of custody of any conflict minerals used, an estimated 37 percent of these companies reported in 2017 that they were able to determine that their conflict minerals came from covered countries or from scrap or recycled sources, compared with 39 and 23 percent in 2016 and 2015, respectively. Four companies in GAO's sample declared their products “DRC conflict-free,” and of those, three included the required Independent Private Sector Audit report (IPSA), and one did not. In 2017, 16 companies filed an IPSA; 19 did so in 2016.

Over the past decade, the United States and the international community have sought to improve security in the DRC. In the eastern DRC, armed groups have committed severe human rights abuses, including sexual violence, and reportedly profit from the exploitation of “conflict minerals”— in particular, tin, tungsten, tantalum, and gold, according to the United Nations. Congress included a provision in the 2010 Dodd-Frank Wall Street Reform and Consumer Protection Act that, among other things, required the SEC to promulgate regulations regarding the use of conflict minerals from the DRC and adjoining countries. The SEC adopted these regulations in 2012. The act also included a provision for GAO to annually assess the SEC regulations' effectiveness in promoting peace and security and report on the rate of sexual violence in the DRC and adjoining countries.

In this report, GAO provides information about (1) companies' conflict minerals disclosures filed with the SEC in 2017 compared with disclosures filed in the prior 2 years and (2) the rate of sexual violence in the eastern DRC and adjoining countries published in 2017 and early 2018. GAO analyzed a generalizable random sample of SEC filings and interviewed relevant officials. GAO reviewed U.S., United Nations, and international organizations' reports; interviewed DRC officials, and other stakeholders; and conducted fieldwork in New York at the United Nations headquarters.