Puget Sound is the nation's second largest estuary, supporting millions of people and a wide variety of species. Development and use, however, have degraded its water quality and habitat, and harmed critical species like salmon and killer whales.

Federal and nonfederal entities have established two main interagency groups to coordinate restoration efforts. However, it's difficult to assess the amount of progress these groups have made, in part because they lack measurable targets for a number of indicators.

We recommended that these groups improve their ability to assess the progress of Puget Sound restoration efforts. 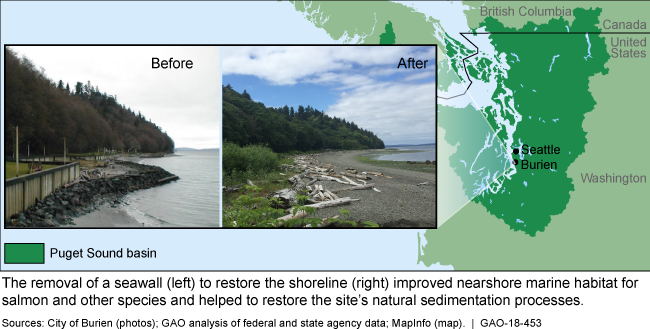 Before and after photographs of a shoreline restoration project, and a map of the project location.

Through its survey of federal and Washington State entities, GAO identified numerous federal and state efforts that, in whole or in part, supported Puget Sound restoration from fiscal years 2012 through 2016. The efforts involved a variety of activities, including habitat protection, water quality improvement, and monitoring. Some of these efforts focused exclusively on Puget Sound restoration, while others had a broader geographic or programmatic scope. Funding for these efforts came from a variety of sources, such as the Environmental Protection Agency (EPA), which reported expending about $142 million for activities in Puget Sound through the National Estuary Program and the Puget Sound Geographic Program during this time frame. However, total expenditures for all efforts are unknown, in part because of difficulties isolating expenditures specific to Puget Sound. A 2017 state audit recommended that two state agencies develop a plan to create a more complete inventory of restoration efforts and related funding. The state agencies concurred and have plans to develop this inventory by August 2019.

Federal and nonfederal entities coordinate restoration efforts through two primary interagency groups. First, the state-led Puget Sound Management Conference has developed a comprehensive conservation and management plan (CCMP), approved by EPA under the National Estuary Program, that serves as the primary planning document for Puget Sound restoration. Second, the Puget Sound Federal Task Force complements the work of the management conference by coordinating the efforts of federal agencies to support the CCMP, including by developing a draft Federal Action Plan that identifies priority federal actions to protect and restore Puget Sound.

The CCMP lays out a framework for assessing restoration progress, including 6 goals, 47 indicators, and recovery targets for 31 of the indicators. In 2017, the Puget Sound Partnership, a state agency, reported that progress had been made in some areas, but many key indicators had not shown improvement. For example:

Puget Sound is the nation's second-largest estuary and serves as an important economic engine in Washington State, supporting millions of people, major industries, and a wide variety of species. However, according to the CCMP, human use and development have degraded water quality and habitats and harmed critical species such as salmon.

GAO is making two recommendations, including that EPA work with the management conference to help ensure that measurable targets are developed where possible for the highest priority indicators currently lacking such targets. EPA agreed with GAO's recommendations and highlighted steps the agency has begun taking and plans to take to address the recommendations.