Providing training and equipment to the nation's foreign partners is one of the Department of Defense's approaches to fighting terrorism.

We reviewed the Global Train and Equip program and found that DOD allocated $4.1 billion for the program in fiscal years 2009 through 2017.

In addition, we looked at how thoroughly proposals for Global Train and Equip projects addressed security assistance planning requirements. We recommended improving guidance and formalizing a quality review process for proposals. This can help decision-makers ensure that program funding is used efficiently. 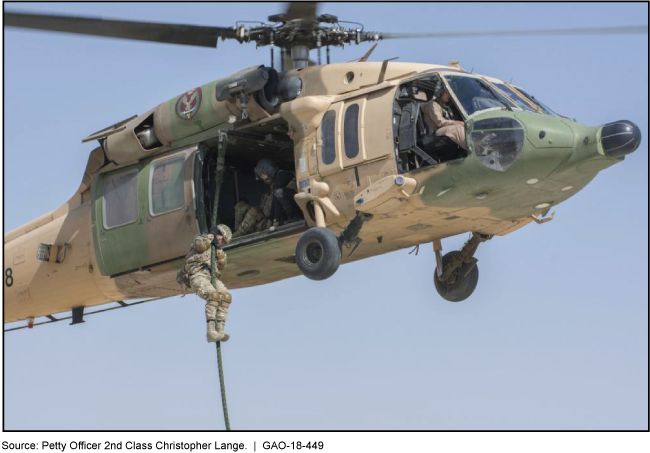 A photograph of Jordanian soldiers doing training exercises in a military helicopter. The Global Train and Equip program can provide this type of equipment to foreign partners.

The Department of Defense (DOD) obligated $3.7 billion of $4.1 billion allocated for the Global Train and Equip program in fiscal years 2009 through 2017 to build partner nations' capacity to counter terrorism. DOD increased allocations for the program in 2016, responding to an influx of funding from appropriations to the Counterterrorism Partnerships Fund. As of December 2017, DOD had disbursed about $2.5 billion of the obligated funds.

Global Train and Equip project proposals for fiscal years 2016 and 2017 consistently addressed only one of four elements of security assistance planning outlined in Presidential Policy Directive 23 . GAO found all 72 proposals in those years included the first element, project objectives. From 2016 to 2017, the percentage of proposals addressing the second element—absorptive capacity—rose from 32 percent to 84 percent. Most 2016 and 2017 proposals included the third element, baseline assessments, but less than three-quarters included complete sustainment plans, the fourth element. DOD guidance for 2016 and 2017 did not include instructions for addressing project sustainment when sustainment was not anticipated, though the 2017 guidance included instructions for addressing the other three planning elements. According to DOD officials, they have developed an informal quality review process to better ensure that 2018 project proposals address all four planning elements. However, DOD has not formalized this informal process as written policy. Standards for Internal Control in the Federal Government calls for documenting internal control activities and policies. Formalizing the proposal review process would help DOD provide consistent oversight of project development and ensure access to complete information about each planning element, including sustainment needs. Such information is critical in helping decision makers ensure efficient use of funding to build partners' capacity.

DOD reporting for 2016 and 2017 indicates progress in building partner capacity to combat terrorism and conduct stability operations as well as factors affecting the progress achieved. According to DOD documents, partner nation recipient units' overall capabilities were greater after implementation of 8 of 21 Global Train and Equip projects, and some of the remaining 13 projects produced some positive results. DOD documents and officials also identified factors—such as equipment suitability and procurement issues—that may have limited the achievement of project objectives.

The United States has undertaken several efforts, including DOD's Global Train and Equip program, to help foreign partners strengthen their security capacity. Presidential Policy Directive 23 states that agencies should target security assistance where it can be effective and highlights the importance of addressing several planning elements in project proposals. DOD develops proposals, using guidance implementing the directive, and selects projects with the Department of State.

The fiscal year 2015 National Defense Authorization Act included a provision for GAO to review the Global Train and Equip program. In this report, GAO examines (1) the status of funding DOD allocated for Global Train and Equip projects in fiscal years 2009 through 2017, (2) the extent to which DOD addressed key security assistance planning elements in project proposals in fiscal years 2016 and 2017, and (3) DOD's reporting on the achievement of Global Train and Equip project objectives and any factors affecting its ability to achieve those objectives. GAO analyzed agency data and program documents and interviewed DOD and State Department officials in Washington, D.C., and at selected combatant commands and embassies.