Improper payments have continued to grow in the Medicaid program, despite efforts to reduce them. The federal-state health care program spent about $596 billion in FY2017, with an estimated $37 billion of federal spending going to improper payments—that's up from $29.1 billion in 2015.

This testimony, which is based on numerous GAO reports from the last 3 years, focuses on additional actions needed to improve oversight and help prevent improper payments. These include

Implementing our prior recommendations related to oversight 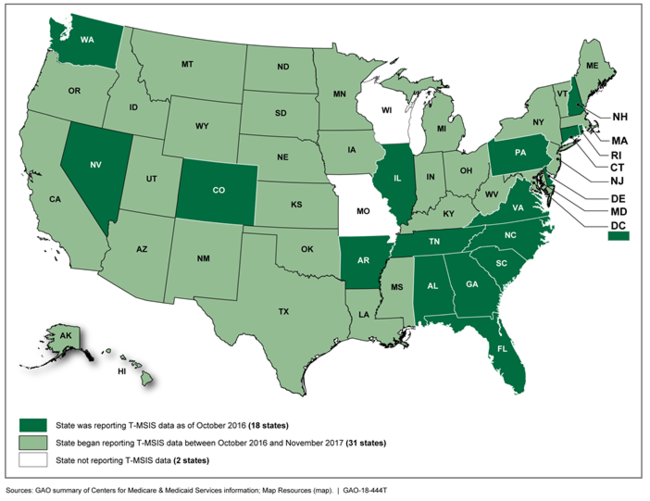 This U.S. map shows that all but two states, Missouri and Wisconsin, were using the new system.

The Centers for Medicare & Medicaid Services (CMS) has taken steps to improve Medicaid program integrity and reduce improper payments; however, GAO has identified areas where additional, or continued, action could help strengthen program integrity and ensure beneficiaries' access to services. These actions include improving data quality, oversight, and federal-state collaboration.

Need for better data. As GAO has previously reported, a fundamental challenge to the oversight of the Medicaid program is the lack of complete, accurate, and timely data. This challenge has hindered CMS's ability to ensure the appropriate use of federal and state dollars for beneficiary care. Without reliable data, CMS is unable to effectively monitor who is providing services, or the type of services provided. CMS has taken steps to develop reliable Medicaid data, most notably with the Transformed Medicaid Statistical Information System, which will collect more information on beneficiaries. This system could improve CMS's ability to identify improper payments and help ensure beneficiaries' access to services, but additional work is needed. In December 2017, GAO made two recommendations to CMS to improve the completeness and comparability of the data from this system and CMS's plans for oversight. The agency concurred with the recommendations, but has not yet implemented them.

Manage program risks. From May 2015 to December 2017, GAO made 11 recommendations that could help CMS better assess the risk of fraud, as well as ensure that only eligible providers—particularly those in managed care—and beneficiaries are enrolled and participating in the Medicaid program. The agency generally concurred with these recommendations, but has not yet implemented them.

Access to services. From August 2017 to January 2018 GAO made eight recommendations aimed at ensuring that beneficiaries with a limited ability to care for themselves—such as those with disabilities, complex health needs, or infants with neonatal abstinence syndrome—have access to necessary services. The agency concurred with the recommendations, but has not yet implemented them.

Need for greater federal-state collaboration. GAO has previously reported that collaborative activities between the federal government and the states—such as sharing promising program integrity practices—are important to improving oversight of the Medicaid program. Recent examples of such activities include a national Medicaid training program for state officials and partnerships to combat Medicaid fraud. However, in March 2017, GAO also found that barriers—such as communication problems between CMS contractors and state officials—have limited the use of collaborative audits, which have the potential to identify substantial overpayments to providers. GAO recommended that CMS identify opportunities to address these barriers. CMS agreed with the recommendations, but has not yet implemented them.

The partnership between the federal government and states is a central tenet of the Medicaid program. Medicaid allows significant flexibility for states to design and implement their programs based on their unique needs. These programs are administered at the state level and overseen at the federal level by CMS. The resulting variability of state Medicaid programs complicates federal efforts to oversee program payments and beneficiaries' access to services.