Individuals who submit falsified information on a form needed to purchase a firearm (e.g., do not disclose a felony conviction) may be subject to investigation and prosecution.

In fiscal 2017, the Bureau of Alcohol, Tobacco, Firearms and Explosives referred about 12,700 denied purchases to its field divisions for investigation. As of June 2018, U.S. Attorney’s Offices prosecuted 12 of these cases.

ATF field divisions may send warning notices to denied persons in lieu of prosecution, but this practice varies across divisions.

We recommended that ATF assess field divisions' use of warning notices and determine if policy changes are needed.

Individuals must sign the ATF Form 4473 to certify they are not prohibited from purchasing firearms. 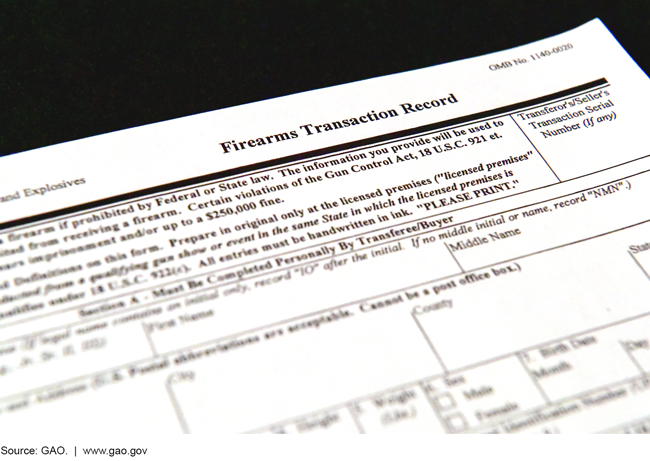 Investigations and prosecutions. Federal and selected state law enforcement agencies that process firearm-related background checks through the National Instant Criminal Background Check System (NICS) collectively investigate and prosecute a small percentage of individuals who falsify information on a firearms form (e.g., do not disclose a felony conviction) and are denied a purchase. Federal NICS checks resulted in about 112,000 denied transactions in fiscal year 2017, of which the Bureau of Alcohol, Tobacco, Firearms and Explosives (ATF) referred about 12,700 to its field divisions for further investigation. U.S. Attorney's Offices (USAO) had prosecuted 12 of these cases as of June 2018.

At the state level, officials from 10 of 13 selected states said they did not investigate or prosecute firearm denials, some citing competing resource demands and the lack of statutes with which states prosecute as reasons. The remaining 3 states investigated a high proportion of firearms denials. One of the 3 states reported about 1,900 referrals for prosecution in 2017 and about 470 convictions.

Challenges. ATF and selected states reported challenges in investigating and prosecuting firearms denials. Officials from six selected ATF field divisions said that investigating the increasing number of denial cases referred to field divisions—which increased from about 5,200 in fiscal year 2011 to about 12,700 in fiscal year 2017—has been time intensive and required use of their limited resources. ATF policy provides that field divisions may send “warning notices” to denied persons in lieu of prosecution, but ATF has not assessed field divisions' use of these notices, which could provide greater awareness of their deterrence value and inform whether any policy changes are needed. Officials from the Executive Office for United States Attorneys said that prosecuting denial cases can require significant effort and may offer little value to public safety compared to other cases involving gun violence. Selected state officials said that denial investigations can take law enforcement officials away from their core duties. State prosecutors said gathering evidence to prove individuals knew they were prohibited was a challenge.

Types of cases. ATF field divisions investigate denial cases based on USAO criteria and generally only refer cases to USAOs for prosecution when aggravating circumstances exist, such as violent felonies or multiple serious offenses over a short period of time. Officials from two of three selected states refer all denial cases for investigation, while one state uses risk-based criteria for selecting cases that include conditions such as felony convictions and misdemeanor crimes of domestic violence. Prosecutors from these three states said they generally pursue cases that involve indications of violence, though individual prosecutors had differing priorities based on public safety concerns.

In 2017, approximately 25.6 million firearm-related background checks were processed through NICS, and about 181,000 of the attempted purchases at the federal and state levels combined were denied because the individual was prohibited from possessing a firearm under federal or state law. Individuals who certify that they are not prohibited from purchasing or receiving a firearm and are subsequently determined to be prohibited could be subject to investigation, and if prosecuted, a fine, imprisonment, or both.

GAO was asked to examine firearms denials. This report (1) describes the extent to which federal and selected state law enforcement agencies investigate and prosecute firearms denial cases; (2) examines related challenges faced by these agencies; and (3) describes the circumstances that lead to investigations and prosecutions. GAO reviewed laws and regulations; analyzed federal and state data from 2011 through 2017; and interviewed officials from ATF headquarters, 6 of 25 ATF field divisions (the 6 that investigated the most cases), and the 13 states that process all NICS checks within their state. Results from state interviews are not generalizable but provide insights on state practices.

GAO recommends that ATF assess the extent to which ATF field divisions use warning notifications as an enforcement tool, which would inform whether changes to policy are needed. DOJ concurred with GAO's recommendation.