Over 52,000 people died of drug overdoses in 2015—and 63% of these involved opioids. For those who are addicted to or misuse opioids, medication-assisted treatment (MAT)—behavioral therapy combined with medication (such as buprenorphine)—can help. However, many people who need it don't have access to it.

The Department of Health and Human Services implemented a number of efforts to improve access to MAT for opioids, such as grant programs for rural primary care settings and allowing additional providers to prescribe buprenorphine. We recommended that HHS 1) set targets to measure improvements in access and 2) establish evaluation timeframes. 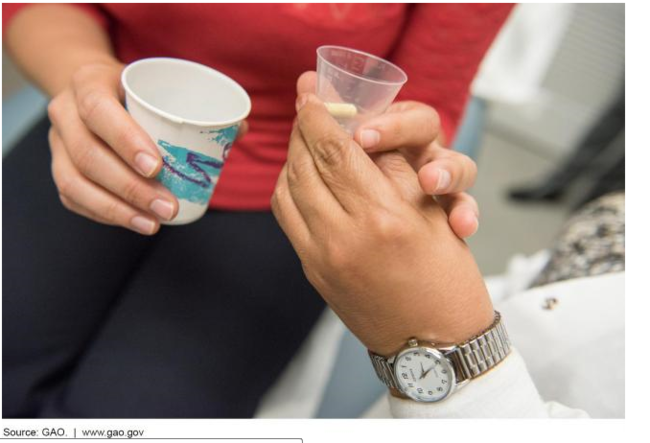 Picture of a doctor giving a patient medication.

In an effort to reduce the prevalence of opioid misuse and the fatalities associated with it, the Department of Health and Human Services (HHS) established a goal to expand access to medication-assisted treatment (MAT). MAT is an approach that combines behavioral therapy and the use of certain medications, such as methadone and buprenorphine. HHS has implemented five key efforts since 2015 that focus on expanding access to MAT for opioid use disorders—four grant programs that focus on expanding access to MAT in various settings (including rural primary care practices and health centers) and regulatory changes that expand treatment capacity by increasing patient limits for buprenorphine prescribers and allowing nurse practitioners and physician assistants to prescribe buprenorphine.

Some of the grant awards were made in 2015, while others were made as recently as May 2017. (See figure.) As of August 2017, efforts under all the grant programs were ongoing. Grant recipients can use funding to undertake a range of activities, such as hiring and training providers and supporting treatments involving MAT. In addition, certain providers and grant recipients are required to develop plans for preventing MAT medications from being diverted for nonmedical purposes.

Figure: Implementation Timeframes of HHS Grants for Expanding Access to Medication-Assisted Treatment for Opioid Use Disorders, 2015 through 2019a

aThese grants were awarded between August 2015 and May 2017.

HHS officials told GAO that as of August 2017, the department was in the process of finalizing its plans to evaluate its efforts to address the opioid epidemic. In September 2016, HHS awarded a contract to conduct the evaluation. HHS officials told GAO that they are still working with the contractor to finalize the evaluation approach and that it will focus on whether HHS's efforts to address the opioid epidemic have been implemented as intended. HHS officials said that in the future, HHS may also evaluate whether, or to what extent, its efforts have been effective in expanding access to MAT, in addition to evaluating implementation.

While HHS has some of the information that could be used in a future evaluation of the effectiveness of its efforts to expand access to MAT, it has not adopted specific performance measures with targets specifying the magnitude of the increases HHS hopes to achieve through its efforts to expand access to MAT, and by when. For example, HHS has not established a long-term target specifying the percentage increase in the number of prescriptions for buprenorphine HHS would like to achieve, which would help to show whether efforts by HHS and others are resulting in a sufficient number of prescriptions for MAT medications. HHS has also not chosen a specific method of measuring treatment capacity or established targets associated with it, which would help determine whether a sufficient number of providers are becoming available to evaluate and treat patients who may benefit from MAT.

Without specifying these performance measures and associated targets, HHS will not have an effective means to determine whether its efforts are helping to expand access to MAT or whether new approaches are needed. Gauging this progress is particularly important given the large gap identified nationwide between the total number of individuals who could benefit from MAT and the limited number who can currently access it based on provider availability.

In addition, GAO also found that as of August 2017, HHS had not finalized its approach for its planned evaluation activities, including timeframes. Without timeframes for the evaluation's activities, HHS increases the risk that the evaluation will not be completed as expeditiously as possible.

In addition to HHS efforts to expand access to MAT, officials from selected states, private health insurers, and national associations reported using several efforts to expand patients' access to MAT for opioid use disorders. For example, several stakeholders provided GAO with the following examples of their efforts:

The misuse of prescription opioid pain relievers and illicit opioids, such as heroin, has contributed to increases in overdose deaths. According to the most recent Centers for Disease Control and Prevention data, in 2015 over 52,000 people died of drug overdose deaths, and about 63 percent of them involved an opioid. For those who are addicted to or misuse opioids, MAT has been shown to be an effective treatment.

GAO was asked to review HHS and other efforts related to MAT for opioid use disorders. This report (1) describes HHS's key efforts to expand access to MAT, (2) examines HHS's evaluation, if any, of its efforts to expand access to MAT, and (3) describes efforts by selected stakeholders (states, private health insurers, and national associations) to expand access to MAT. GAO gathered information from HHS officials as well as a non-generalizable selection of 15 stakeholders selected based on their MAT expansion activities, among other factors. GAO also assessed HHS's evaluation plans using internal control standards for defining objectives and evaluating results.

GAO recommends that HHS take two actions: (1) establish performance measures with targets related to expanding access to MAT, and (2) establish timeframes for its evaluation of its efforts to expand access to MAT. HHS concurred with both recommendations.