NNSA's plans and budget to modernize its nuclear weapons do not align. 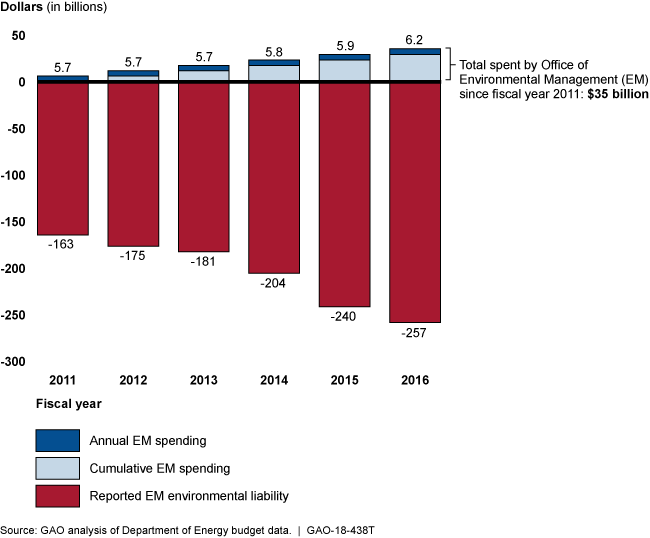 The Department of Energy's (DOE) National Nuclear Security Administration (NNSA) faces challenges related to the affordability of its nuclear modernization programs. In April 2017, GAO found a misalignment between NNSA's modernization plans and the estimated budgetary resources needed to carry out those plans. Specifically, GAO found that NNSA's estimates of funding needed for its modernization plans sometimes exceeded the budgetary projections included in the President's planned near-term (fiscal years 2018 through 2021) and long-term (fiscal years 2022 through 2026) modernization budgets. GAO also found that the costs of some major modernization programs—such as for nuclear weapon refurbishments—may also increase and further strain future modernization budgets. GAO recommended in April 2017 that NNSA include an assessment of the affordability of its modernization programs in future versions of its annual plan on stockpile stewardship; NNSA neither agreed nor disagreed with that recommendation.

DOE also faces challenges with addressing its environmental liabilities—the total cost of its cleanup responsibilities. According to the Fiscal Year 2017 Financial Report of the United States Government , DOE is responsible for $383.8 billion—about 83 percent—of the federal government's $464.5 billion total reported environmental liability. GAO and other organizations have reported that DOE has not consistently taken a risk-informed approach to decision making for environmental cleanup, which could reduce costs while also reducing environmental risks more quickly. For example, in May 2017, we found that DOE may be able to save tens of billions of dollars and accelerate its waste treatment mission by reconsidering its approach for treating a portion of tank waste at DOE's Hanford Site in Washington State. Since 1994, GAO has made at least 30 recommendations to DOE and other federal agencies, which could reduce long-term costs and environmental risks more quickly. Of these, 15 remain unimplemented.

DOE has taken several important steps that demonstrate its commitment to improving contract and project management, but challenges persist. Specifically, DOE's revised project management order, issued in May 2016, made several changes in response to recommendations GAO made in prior years, such as recommending that projects develop cost estimates and analyses of alternatives according to GAO's best practices. However, DOE's recent efforts do not address several areas, such as acquisition planning for major contracts and aspects of program and project management with which the department continues to struggle. GAO has made several recommendations related to these areas, and DOE has generally agreed with most of them.

Finally, NNSA faces challenges in implementing its nonproliferation programs. For example, in September 2017, GAO found that selected programs in NNSA's Office of Defense Nuclear Nonproliferation (DNN) did not measure performance against schedule and cost baselines, as recommended by program management leading practices because DNN's program management policy did not require programs to measure performance in this way. GAO recommended that DNN revise its policy to require programs to measure performance against cost and schedule baselines. NNSA indicated it plans to take action to revise its policy.

Over the last few years, GAO has reported on a wide range of challenges facing DOE and NNSA. These challenges contribute to GAO's continuing inclusion of DOE's management of major contracts and projects on the list of agencies and program areas that are at high risk of fraud, waste, abuse, and mismanagement. GAO also recently added the U.S. government's environmental liabilities to this list.

This statement is based on 18 GAO reports issued from October 2014 through February 2018 and discusses (1) challenges related to the affordability of NNSA's nuclear modernization plans; (2) challenges related to DOE's environmental liabilities; (3) the status of DOE's efforts to improve its management of contracts, projects, and programs; and (4) challenges facing NNSA's nonproliferation program. With NNSA documents, GAO updated its prior work on the affordability of NNSA's modernization plans.

GAO is not making any new recommendations. GAO has suggested that Congress consider taking certain actions and that DOE continue to act on the numerous recommendations GAO has made to address these challenges.