Oil and gas leases on federal land generate billions of dollars in revenues to the government. Lease holders typically have 10 years to begin drilling for oil and gas. However, the clock is stopped (sometimes for decades) and payments can be halted if the Bureau of Land Management suspends the lease—for example, due to permit issues or environmental reviews.

Location of Oil and Gas Leases and Recorded Suspensions, as of September 30, 2016 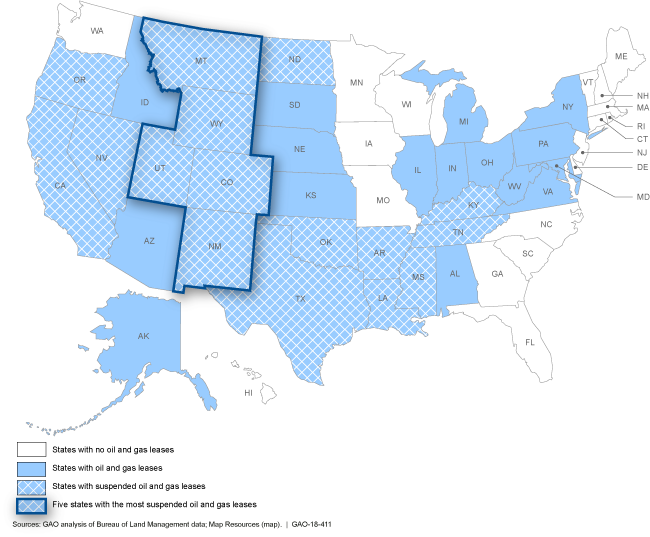 This map shows Montana, Wyoming, Utah, Colorado, and New Mexico as the states with the most suspended leases.

According to data at the end of fiscal year 2016 from the Bureau of Land Management (BLM), a small portion of oil and gas leases were suspended for various lengths of time (as shown below), but the reasons for the suspensions were difficult to determine. During a suspension, the government generally does not collect revenues from the lease. Determining the reasons for suspensions is difficult, in part because BLM does not require the inclusion of this information in its database. To obtain this information, BLM officials would have to review the official lease files, of which many are in hard copy. Under Standards for Internal Control in the Federal Government , management should use quality information to achieve the entity's objectives. BLM field officials GAO interviewed said that additional, more detailed information in the database on reasons for suspensions would be helpful in tracking lease suspensions. By including a data field in the database to record the reasons for suspensions, BLM could better ensure that federal lands are not being inappropriately kept from development—potentially foregoing revenue—or from other valuable uses of public lands.

Active Oil and Gas Leases and Leases Recorded as in Suspension by Length of Suspension, as of September 30, 2016 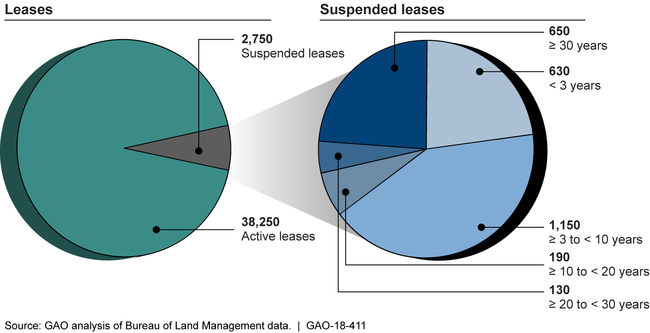 Note: Numbers represented in the figure have been rounded.

Oil and gas leases on federal lands generate billions of dollars in rents and royalty payments for the federal government each year, but these revenues can be reduced if leases are suspended (i.e., placed on hold). Questions have been raised about whether some suspensions, particularly those in effect for more than 10 years, may hinder oil and gas production or adversely affect the use of federal lands for other purposes, such as recreation.

GAO was asked to review oil and gas lease suspensions on federal lands managed by BLM. This report examines, among other things, (1) the extent of and reasons for such suspensions and (2) the approach BLM uses to monitor the status of lease suspensions. GAO analyzed all data on suspensions in a BLM database and the official lease files for a nongeneralizable sample of 48 leases recorded as suspended in, Montana and Wyoming, which GAO selected based in part on the large number of suspensions these states had. GAO also reviewed BLM documents and interviewed BLM officials.

To better ensure that federal lands are not being inappropriately kept from development, GAO is making four recommendations, including that BLM record the reasons for lease suspensions in its database and develop procedures for monitoring suspensions. Interior concurred with GAO's recommendations.