Long Island Sound, an estuary in one of the nation's most densely populated areas, provides many economic and recreational benefits. However, development and pollution have degraded water quality and led to hypoxia, low levels of dissolved oxygen that increase mortality of fish and other species.

A federal-state partnership funded restoration projects and created a plan and cost estimates to restore the Sound. However, current reports and estimates do not provide complete information about how progress will be measured or what restoration will cost.

We recommended steps to improve the partnership's progress reports and cost estimates. 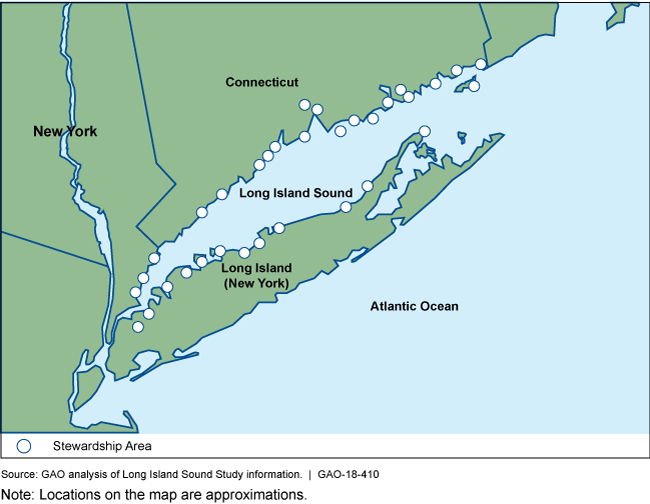 The Long Island Sound Study (the Study) is a federal-state partnership formed in 1985 to restore Long Island Sound. The Environmental Protection Agency (EPA) and officials from Connecticut and New York provide oversight for the Study, which includes federal and state agencies, nonprofit organizations, and other groups. GAO found the following:

Progress toward 1994 Plan. The Study established an initial plan for the Sound in 1994 and has collected data on certain indicators of the Sound's health and published progress reports on its website. However, the Study has not comprehensively assessed progress against the 1994 plan. In the absence of such an assessment, GAO interviewed Study members who generally agreed that moderate progress has been made in achieving goals for five of the six problem areas in the 1994 plan. Without a comprehensive assessment, it is not possible to determine the extent these views reflect actual progress.

Reporting Progress for the 2015 Plan. The Study's 2015 management plan identifies 20 long-term targets and associated numerical indicators that will be used to measure future progress. The Study has also updated the format for pages on its website to provide more consistent progress reports for these targets. However, the reports do not yet fully incorporate leading practices for performance reporting that GAO has previously identified. For example, they do not include evaluations of goals that are not met for 15 targets. By ensuring that leading practices are fully incorporated into the Study's performance reporting efforts, EPA can help the Study better assess and report on future progress.

Estimating Costs of Restoration. The Study has estimated that the future costs of restoration will be at least $18.9 billion through 2035. However, the current estimates are understated because they do not include the costs of all activities that will be needed to accomplish the 2015 plan, and they do not reflect the uncertainty associated with some of the costs. By capturing the full costs and uncertainties in cost estimates, the Study can provide decision makers critical information needed to allocate resources effectively.

A Salt Marsh in the Long Island Sound Watershed

Long Island Sound, an estuary bordered by Connecticut and New York, provides numerous economic and recreational benefits. However, development and pollution have resulted in environmental impacts, such as the degradation of water quality. EPA partnered with both states to create the Study to restore and protect the Sound. The Study developed a comprehensive conservation and management plan in 1994 and updated the plan in 2015.

GAO was asked to examine federal efforts to restore the Sound. This report examines, among other objectives, (1) what is known about the progress made toward achieving the 1994 plan, (2) how Study members plan to measure and report on progress toward achieving the 2015 plan, and (3) estimated costs of the restoration. GAO reviewed Study plans, reports, and data. GAO also interviewed 12 Study members—including federal and state agency officials—and representatives of 5 Study work groups about restoration efforts and progress made.

GAO recommends that EPA work with the Study to ensure that it fully incorporates leading practices into its performance reporting efforts and that its cost estimates include the full range of activities as well as those for which there is uncertainty. EPA agreed with GAO's recommendations and highlighted steps the agency will take to meet the recommendations.