We surveyed school districts across the country on testing for lead in drinking water in 2017. Based on our nationally generalizable survey, we estimate that:

41% of districts, serving 12 million students, had not tested for lead in the 12 months before completing our survey.

43% of districts, serving 35 million students, tested for lead. Of those, 37% found elevated levels and reduced or eliminated exposure.

At least 8 states require schools to test for lead, and many others assist with voluntary testing.

We made 7 recommendations to promote testing and improve guidance for school districts.

(We updated this text to clarify the number of states requiring testing or assisting with voluntary testing.)

New Water Fountain Installed to Replace One that was Leaching Lead 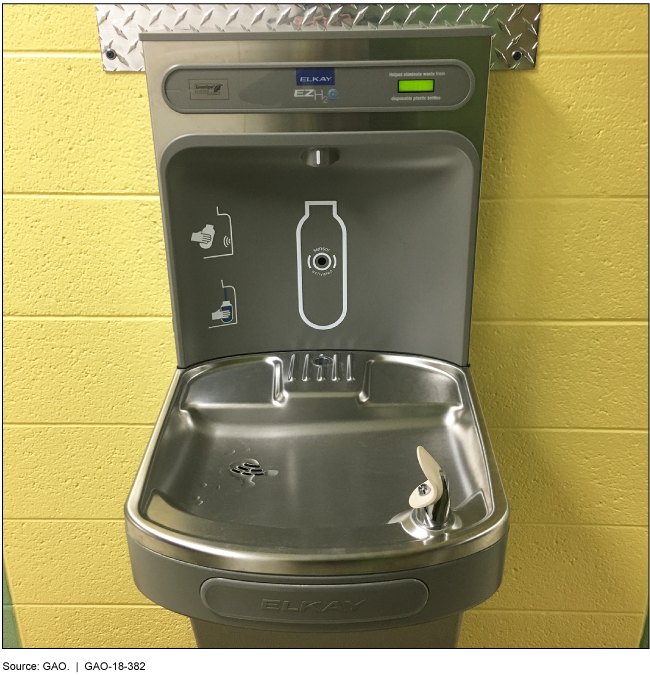 Photograph of a new water fountain

According to the Environmental Protection Agency (EPA), at least 8 states have requirements that schools test for lead in drinking water as of 2017, and at least 13 additional states supported school districts' voluntary efforts with funding or in-kind support for testing and remediation. In addition, the five states GAO visited provided examples of technical assistance to support testing in schools.

EPA provides guidance and other resources to states and school districts regarding testing and remediating lead in drinking water, and the Department of Education (Education) provides some of this information on its websites. School district officials that used EPA's written guidance said they generally found it helpful. Although EPA guidance emphasizes the importance of addressing elevated lead levels, GAO found that some aspects of the guidance, such as the threshold for taking remedial action, were potentially misleading and unclear, which can put school districts at risk of making uninformed decisions. In addition, many school districts reported a lack of familiarity with EPA's guidance, and their familiarity varied by region of the country. Education and EPA do not regularly collaborate to support state and school district efforts on lead in drinking water, despite agreeing to do so in a 2005 memorandum of understanding. Such collaboration could encourage testing and ensure that more school districts will have the necessary information to limit student and staff exposure to lead.

No federal law requires testing of drinking water for lead in schools that receive water from public water systems, although these systems are regulated by the EPA. Lead can leach into water from plumbing materials inside a school. The discovery of toxic levels of lead in water in Flint, Michigan, in 2015 has renewed awareness about the danger lead exposure poses to public health, especially for children.

Lead Safety at Home and in School

Exposure to lead can harm a child’s brain, growth, behavior, and ability to learn. No safe blood...
Blog Post