The VA has been working to address opioid safety for veterans and has made progress in reducing opioid prescriptions. For example, VA has started a program to educate providers on best practices related to pain management and the optimal use of opioids.

However, we found that VA has not fully met all of its opioid safety goals. Its health care providers also are not consistently adhering to evidence-based opioid risk mitigation strategies (such as annual urine drug screenings).

We made a number of recommendations to help the VA improve opioid safety. 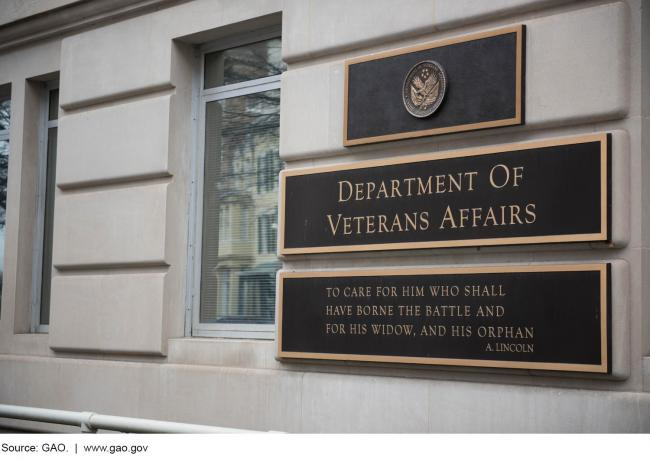 A photo of the Department of Veterans Affairs headquarters building.

The Veterans Health Administration (VHA) has made progress improving opioid safety through its Opioid Safety Initiative (OSI). Launched in 2013, the OSI aims to help ensure that veterans are prescribed opioids in a safe and effective manner. Since the OSI began, VHA has seen reductions in opioid prescribing rates. For example, from the fourth quarter of fiscal year 2013 to the first quarter of fiscal year 2018, the percentage of patients dispensed an opioid decreased from about 17 percent to about 10 percent, or by about 267,000 veterans. Also, available evidence suggests VHA has accomplished six of nine OSI goals established in 2014; however, it is unclear whether the remaining three goals have been fully met. For example, in the case of OSI goal four (establishing safe and effective regional tapering programs for patients on opioids and benzodiazepines), GAO found that VHA lacked documentation that its regional networks established these programs. VHA also did not establish measures of safety or effectiveness under this goal. These limitations prevent VHA from fully evaluating progress and accurately determining the extent to which its efforts to help ensure safe and effective prescribing of opioids have been successful.

In a review of a nongeneralizable sample of 103 veterans' medical records at five selected VHA medical facilities, GAO found that VHA providers did not always adhere to key opioid risk mitigation strategies, which are required by VHA policy or relevant to OSI goals. For example, among 53 veterans who were prescribed long-term opioid therapy (defined as a 90-day supply in the last 6 months), GAO found that

40 veterans did not have their names queried in a state-run prescription drug monitoring program database. The databases are used to identify patients who are receiving multiple prescriptions that may place them at greater risk for misusing opioids or overdosing;

21 veterans did not have a urine drug screening within the year prior to having their prescription filled. The screenings are used to determine whether veterans are taking their opioid medications as prescribed; and

12 veterans did not provide written informed consent. Informed consent is a formal acknowledgement that the veteran has been educated on the risks and benefits of opioid use prior to initiating long-term opioid therapy.

GAO found several factors that may have contributed to inconsistent adherence to key opioid risk mitigation strategies at the selected VHA facilities. For example, four of the five selected facilities did not have a pain champion (a primary care position required by VHA that can help providers adhere to opioid risk mitigation strategies), and not all facilities had access to academic detailing, a program in which trained clinical pharmacists work one-on-one with providers to better inform them about evidence-based care related to the appropriate treatment of relevant medical conditions. In addition, three of the five facilities did not consistently review veterans' medical records to ensure provider adherence to these strategies. To the extent that these factors affect all VHA facilities, VHA will continue to face challenges ensuring that its providers prescribe opioids in a safe and effective manner.

The Comprehensive Addiction and Recovery Act of 2016 and Senate Report 114-57 included provisions for GAO to report on VHA's OSI and the opioid prescribing practices of its health care providers.

This report examines, among other issues, (1) the extent to which VHA has met OSI goals established in 2014 and (2) the extent to which VHA providers adhere to key opioid risk mitigation strategies. To do this work, GAO reviewed data and documents related to OSI efforts and goals and interviewed VHA officials. In addition, GAO reviewed a random, nongeneralizable selection of medical records for 103 veterans who were prescribed opioids at five selected VHA medical facilities from March 2016 through March 2017. GAO selected the facilities to obtain diversity in geography and rates of opioid prescribing. At the selected facilities, GAO reviewed facility data and documents related to opioid safety and interviewed officials.

GAO is making five recommendations to VHA, including that it document actions and develop measurable outcomes related to its OSI goals, ensure that providers are adhering to opioid risk mitigation strategies, and ensure that all its regional networks have implemented academic detailing programs and that all VHA medical facilities have a designated primary care pain champion, as required. The Department of Veterans Affairs concurred with GAO's recommendations and described steps it will take to implement them.