How is Health and Human Services helping states prepare for the next big disease outbreak?

Over a 15-year period, HHS awarded about $3 billion to states and others to respond to specific disease threats, such as Zika, Ebola, and H1N1 pandemic influenza.

HHS awarded an additional $18 billion for more general public health preparedness and capacity-building activities, such as getting ready for infectious disease threats and terrorist events.

We assessed preparedness efforts of states and others and found mixed results. For example, most responder protection and coordination efforts met goals, while efforts in other areas were less consistent. 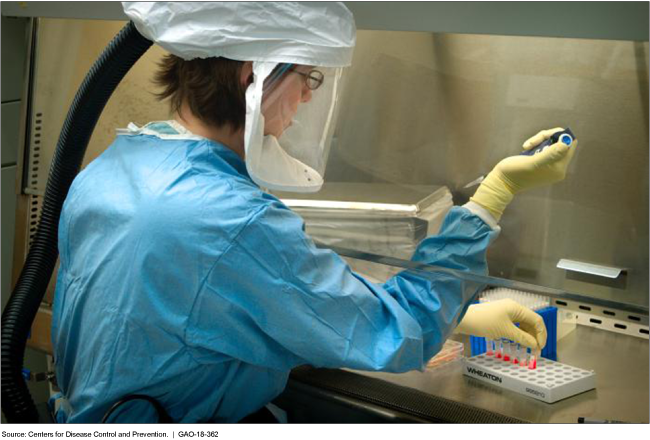 A woman in protective gear works with a pipette in one hand and a test tube in the other.

The Department of Health and Human Services (HHS) has three key preparedness and capacity-building programs—Epidemiology and Laboratory Capacity for Infectious Diseases (ELC), the Hospital Preparedness Program (HPP), and Public Health Emergency Preparedness (PHEP). These three programs awarded about $21.2 billion to states and other jurisdictions from 2002 through 2017 to carry out public health preparedness and response efforts, including those related to infectious diseases, natural disasters, or terrorist events. Of this amount, $18.4 billion were awards funded from annual appropriations. The remaining was funded from supplemental appropriations to respond to specific infectious disease threats, including Zika, Ebola, and H1N1 pandemic influenza. HHS officials and non-federal stakeholders told GAO that supplemental appropriations were important for supporting necessary surges in capacity, but the timing of additional awards can limit response.

HHS's three key preparedness and capacity-building programs measure performance in four areas that directly relate to infectious disease preparedness capacity—electronic lab reporting, epidemiology capacity, laboratory capacity, and responder protection. The majority of awardees (states and other jurisdictions) met targets for all nine measures in the responder protection area, which measures activities related to safety and coordination for responders. However, awardee performance in the other three areas was mixed.

Electronic lab reporting. One of two measures was met in this area. This area relates to the sending of laboratory reports to public health agencies via electronic means (as opposed to traditional, paper reports).

Epidemiology capacity. One of three measures was met in this area. This area relates to awardees' ability to identify and respond to infectious disease outbreaks.

Laboratory capacity. Five of six measures were met in this area. This area relates to both laboratory testing of certain pathogens, and communication between laboratories and other public entities.

HHS reviewed a copy of this report and provided technical comments, which GAO incorporated as appropriate.

An infectious disease threat is unique because of the transmissibility of diseases and the mobility of human populations, among other reasons. Infectious disease threats in recent years—such as Zika and Ebola outbreaks—have heightened the United States' attention to future potential threats, and raised questions about the nation's preparedness and response capabilities.

A congressional report included a provision for GAO to report on the U.S. public health system's current capacity to respond to infectious disease threats. This report describes (1) funding HHS has made available to awardees—states and other jurisdictions—through its key preparedness and capacity-building programs—ELC, HPP, and PHEP; and (2) these programs' performance measurement data on the awardees' infectious disease preparedness capacity.

To do this work, GAO analyzed HHS's data on awards provided to awardees through the three key programs using annual and supplemental appropriations, and interviewed HHS officials and non-federal stakeholders about such funding. GAO identified non-federal stakeholders representing medical and public health associations, research centers, and others through a review of relevant literature, as well as prior GAO work. GAO also reviewed the most recently available data on awardee performance on 20 measures directly related to infectious disease preparedness collectively used by the three programs. GAO categorized these 20 measures into four preparedness capacity areas.