The 2014-2015 Ebola outbreak in West Africa disrupted the region's health systems, job markets, and food supplies. Congress appropriated funds to USAID and State for Ebola response and preparedness. USAID and, to a lesser extent, State used some funds for Ebola recovery projects.

We reported on the status of USAID's recovery projects. USAID had completed 62 of its 131 projects, as of September 2017. 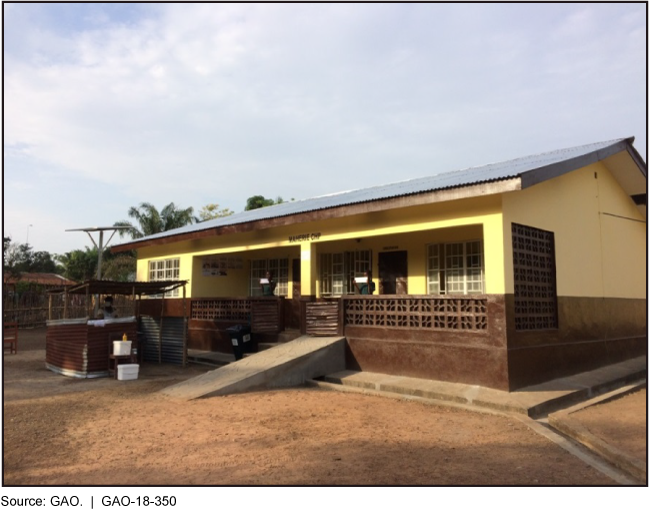 Photo of a one-story building with entry ramp.

As of September 30, 2017, of the $1.6 billion that the U.S. Agency for International Development (USAID) had obligated for the Ebola outbreak, $411.6 million was obligated for 131 Ebola recovery projects. Of the $411.6 million, USAID obligated the largest amount—about $247.6 million (60 percent)—from the Economic Support Fund account for recovery projects to support health systems recovery, governance and economic crisis mitigation, and Ebola survivors, among others. USAID obligated about $118.5 million from the International Disaster Assistance account for food security projects, such as food assistance and agricultural market support, and $45.5 million from the Global Health Programs account for Ebola survivor and world health reform projects.

As of September 2017, USAID had completed 62 of its 131 planned Ebola recovery projects, had 65 projects that were ongoing, and had 4 planned projects that it had not yet started. Of the 62 completed projects, USAID had completed 39 within original time frames and budgeted costs and extended 23. Of the 65 ongoing projects, USAID expected to implement 46 within original time frames and costs, but had extended 19. USAID extended projects, in part, to complete host-government actions, hire staff, finalize project activities, and continue and expand food assistance.

In 2016, USAID contracted for an evaluation of its Ebola recovery activities. Although the contractor has completed some design elements for the evaluation, USAID had not ensured that a complete and accurate inventory of USAID's Ebola recovery projects had been compiled for the evaluation as of December 2017. USAID intends to use the information and lessons learned from this evaluation to inform and improve its ability to respond to future global health emergencies. GAO's comparison of the contractor's inventory with USAID data provided to Congress found a number of discrepancies that USAID officials could not explain with certainty. USAID policy states that information collected should be of sufficient quality to be useful for the intended users. Until USAID ensures that the contractor develops a complete and accurate inventory of USAID's Ebola recovery projects, USAID will not have assurance that the resulting evaluation will be of sufficient quality.

The 2014-2015 Ebola outbreak in West Africa caused long-term second-order impacts, including disruptions to health systems, job loss, and food insecurity. Congress appropriated about $2.5 billion for USAID and the Department of State (State), in part, for international efforts to prevent, prepare for, and respond to an Ebola outbreak and mandated that the agencies report to congressional committees on the use of the funds. As of September 2017, USAID had allocated almost all of the appropriated Ebola funds. In 2016, USAID contracted for an evaluation of Ebola recovery activities.

The fiscal year 2015 appropriations act included a provision for GAO to conduct oversight of USAID and State activities supported with funds from the Ebola response and preparedness appropriations. GAO's 2016 report (GAO-17-35) focused on USAID and State funding for Ebola response and preparedness. This report examines (1) obligations for USAID's Ebola recovery projects, (2) the status of USAID's implementation of these projects, and (3) USAID's evaluation of Ebola recovery efforts. GAO analyzed USAID funding data as of September 30, 2017, which are the latest data provided to Congress, reviewed project documents and evaluation plans, interviewed agency officials, and conducted fieldwork in Guinea, Liberia, and Sierra Leone.

The Administrator of USAID should ensure that a complete and accurate inventory of Ebola recovery projects is compiled for the ongoing evaluation. USAID concurred with GAO's recommendation.

Disease modeling: How Math Can Help In A Pandemic