The Endangered Species Act established a fund to provide grants to states and territories for the conservation of endangered and threatened species. Treasury is required to make deposits into the fund when the amount NOAA and FWS collect for violations of certain laws exceeds $500,000.

We recommended that NOAA track its collections and request that Treasury make required deposits into the fund.

Grizzly bears—listed as threatened under the Endangered Species Act 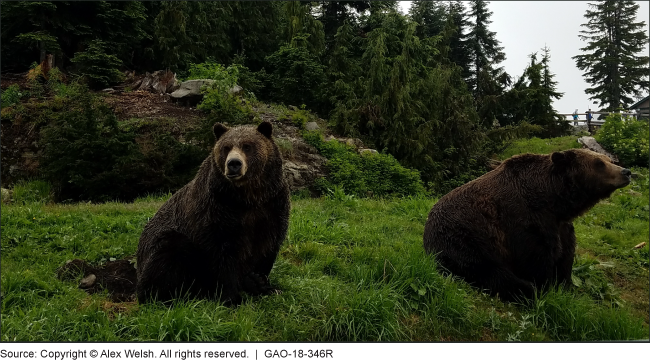 Photo of grizzly bears, which are listed as threatened under the Endangered Species Act

The Endangered Species Act (ESA) established the Cooperative Endangered Species Conservation Fund (Fund) to provide grants to states and territories for the conservation of endangered and threatened species on nonfederal lands, among other things. Under section 11(d) of the act, the Department of the Treasury (Treasury) makes deposits from the General Fund of the U.S. Treasury to the Fund when violations of the ESA or the Lacey Act result in the National Oceanic and Atmospheric Administration (NOAA) and the U.S. Fish and Wildlife Service (FWS) collecting fines, penalties, and property forfeiture proceeds (i.e., collections) above the $500,000 statutory threshold.

Because NOAA does not track its collections specific to ESA and Lacey Act violations, the agency cannot calculate and notify Treasury when a deposit needs to be made into the Fund. Treasury officials said they rely on NOAA and FWS to track the amounts the agencies have collected above the $500,000 statutory threshold for Fund deposits. NOAA officials said the agency did not request that Treasury make deposits in fiscal years 2014 to 2017, and Treasury officials confirmed that they did not receive requests from NOAA or make deposits to the Fund based on NOAA’s ESA and Lacey Act collections during this period. In contrast, FWS requested that Treasury make deposits equal to the amounts FWS collected above the $500,000 statutory threshold, and Treasury made corresponding deposits to the Fund each year from fiscal years 2014 through 2017, for a total of approximately $7.6 million across the period.

Based on three NOAA law enforcement cases GAO examined, it appears that NOAA had collections in one case that by itself may have exceeded the $500,000 threshold for a required deposit to the Fund. Specifically, NOAA collected almost $650,000 in one 2015 case for violations of multiple laws, including the Lacey Act. If the $500,000 statutory threshold for ESA and Lacey Act collections was met, then a deposit to the Fund would have been required. Without a means for NOAA to track its collections specific to ESA and Lacey Act violations and request that Treasury make any needed deposits, the Fund may not receive some statutorily required deposits.

The ESA aims to conserve threatened and endangered species and the ecosystems upon which they depend, and the Lacey Act prohibits the transportation and sale of plants, fish, and wildlife taken in violation of U.S., state, or foreign law, among other things. NOAA primarily enforces the ESA and the Lacey Act for most marine species and anadromous fish, and FWS primarily enforces those two laws for terrestrial, freshwater, and bird species. As a result, both agencies may make collections for ESA or Lacey Act violations that trigger a required deposit to the Fund. Examples of ESA and Lacey Act violations that could result in collections include the killing of endangered marine mammals and the sale of these animals or their parts.

The NOAA Administrator should develop and implement a mechanism to track agency collections for ESA and Lacey Act violations and request that the Secretary of the Treasury make any required deposits to the Fund. The agency concurred with GAO’s recommendation.