In an effort to reduce improper payments and reduce expenses, the Medicare program has experimented with requiring prior authorization. This means beneficiaries need approval before they can receive certain services or items like powered wheelchairs.

We found this approach, which started in 7 states in 2012, reduced spending on these items and services by as much as $1.9 billion. Providers and suppliers reported benefits from the approach, but also had concerns about uncertainties created over what is covered. 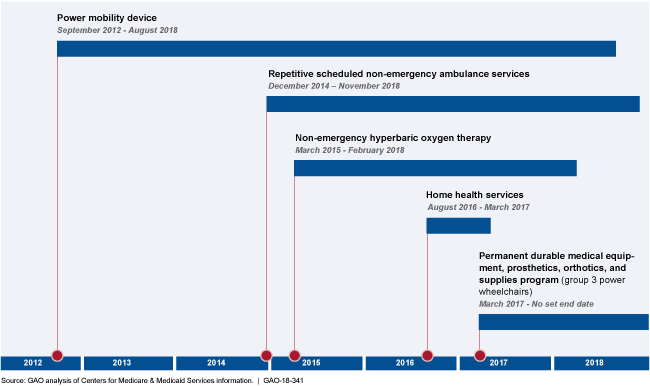 This graphic shows implementation and end dates for each prior authorization program.

Prior authorization is a payment approach used by private insurers that generally requires health care providers and suppliers to first demonstrate compliance with coverage and payment rules before certain items or services are provided to patients, rather than after the items or services have been provided. This approach may be used to reduce expenditures, unnecessary utilization, and improper payments. The Centers for Medicare & Medicaid Services (CMS) has begun using prior authorization in Medicare through a series of fixed-length demonstrations designed to measure their effectiveness, and one permanent program. According to GAO's analyses, expenditures decreased for items and services subject to a demonstration. GAO's analyses of actual expenditures and estimated expenditures in the absence of the demonstrations found that estimated savings from all demonstrations through March 2017 could be as high as about $1.1 to $1.9 billion. While CMS officials said that prior authorization likely played a large role in reducing expenditures, it is difficult to separate the effects of prior authorization from other program integrity efforts. For example, CMS implemented a durable medical equipment competitive bidding program in January 2011, and according to the agency, it resulted in lower expenditures.