Cell-phone cameras have their roots in a federal lab—thanks to laws encouraging commercial use of federal inventions.

The federal government spends about $137 billion a year researching and developing inventions. The government can license the patents on these inventions to private companies to further develop and bring the technologies to market.

Federal agencies and labs said that identifying patentable inventions was difficult, with some citing inadequate tracking systems. Stakeholders said that the bureaucracy and length of the patent licensing process could deter companies.

We made 7 recommendations to address these and other challenges.

The digital image sensors used in cell-phone cameras were developed in the 1990s at the Jet Propulsion Laboratory under NASA. 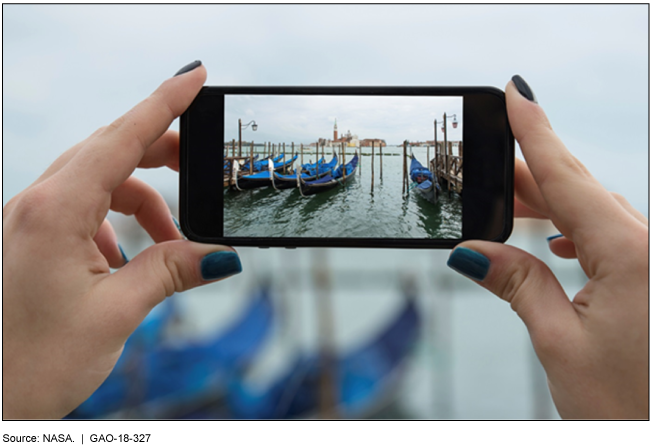 Photo of a person holding up a cell phone to take a photo of boats.

Federal agency and laboratory (lab) officials identified challenges in licensing patents across the federal government, and agencies have taken some steps to address and report them. Patent licensing is a technology transfer activity that allows, for example, federal inventions to be legally transferred to the private sector for commercial use. Specifically, officials at the Departments of Defense (DOD) and Energy (DOE), National Aeronautics and Space Administration (NASA), and National Institutes of Health (NIH), as well as external stakeholders, noted challenges in having researchers identify potentially patentable inventions. DOD, DOE, and NIH officials also cited having inadequate internal systems to keep track of inventions developed in the labs. In addition, several stakeholders stated that licensing patented inventions can be lengthy and bureaucratic, which may deter companies from licensing. The agencies reported taking steps to address these challenges, such as implementing model license agreements across labs to expedite the process.

The Department of Commerce has delegated to its National Institute of Standards and Technology (NIST) to annually report agencies' technology transfer activities, including patent licensing. Although NIST has reported some challenges, it has not fully reported the range of challenges identified by agency and lab officials and stakeholders. NIST officials stated that they were generally aware of the challenges but had not considered including them to a greater degree in their annual reports to Congress. By fully reporting the range of challenges in federal patent licensing, NIST has the opportunity to further ensure that Congress is more aware of challenges that limit agencies' efforts and ways for potentially addressing those challenges.

The federal government spends approximately $137 billion annually on research and development—mostly at DOD, DOE, NASA, and NIH—to further agencies' missions, including at federal labs. Multiple laws have directed agencies and labs to encourage commercial use of their inventions, in part by licensing patents, to private sector companies and others that aim to further develop and bring the inventions to market.

GAO was asked to review agency practices for managing inventions developed at federal labs, with a particular focus on patent licensing. This report examines (1) challenges in licensing patents and steps taken to address and report them and (2) information to guide establishing financial terms in patent licenses at DOD, DOE, NASA, and NIH. GAO reviewed relevant literature, laws, and agency documents, including patent licenses from 2014, to match the most recent NIST summary report when the licenses were requested, and GAO interviewed agency officials and knowledgeable stakeholders, including organizations that assist federal labs in licensing patents.

GAO is making seven recommendations, including that Commerce instruct NIST to fully report the range of challenges in federal patent licensing in its annual reports to Congress and facilitate information sharing among agencies. Commerce, DOD, DOE, NASA, and NIH generally agreed with GAO's recommendations and are taking steps to implement them.