What happens if a doctor bills Medicare or Medicaid for services that could be considered fraud—because they're medically unnecessary, or because the doctor didn't actually provide the services? Federal law prohibits these and other abuses of federal health care programs.

When health care providers break these laws, the Department of Health and Human Services can prevent them from billing federal programs. Or, it can negotiate agreements with them instead—for example, requiring them to have their billing records audited.

We reviewed HHS's use of the agreement option and found that it made 652 agreements between July 2005 and July 2017.

To help improve adherence to federal health care program requirements by entities that have allegedly engaged in certain acts, such as submitting false or fraudulent claims, the Department of Health and Human Services' Office of Inspector General (HHS-OIG) entered into 652 agreements with those entities from July 2005 to July 2017. Since 2010, two types of agreements have been used: Corporate Integrity Agreements (CIA) and Integrity Agreements (IA). The more commonly used CIAs apply to larger entities, compared to IAs, which apply to individual practitioners or small businesses. From July 2005 through July 2017, about half of all agreements were with 3 types of entities—individual or small group practices, hospitals, and skilled nursing facilities. 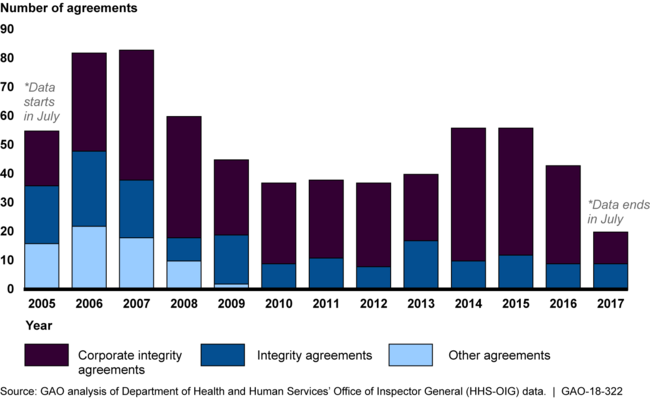 For new agreements since July 2005, the most common initial allegations that led to an entity entering into an agreement included billing for services not provided and providing medically unnecessary services. When negotiating agreements, HHS-OIG uses one of six templates that address the different types of entities or conduct involved. Across agreements the provisions are generally similar—for example, requirements to provide training on specified topics or to hire a compliance officer.

HHS-OIG uses multiple strategies to oversee agreements, such as requiring periodic reports from the entities that demonstrate compliance and assigning a monitor to review these reports and conduct site visits. HHS-OIG can also take certain actions to address noncompliance. For example, for new agreements from July 2005 through July 2017, HHS-OIG imposed monetary penalties 41 times, ranging from $1,000 to more than $3 million (median of $18,000), and excluded 4 entities from participation in federal health care programs.

HHS-OIG has the authority to exclude providers and other entities that have committed certain acts, such as submitting false or fraudulent claims, from participation in federal health care programs. However, HHS-OIG can enter into agreements—CIAs and IAs—with providers and other entities as an alternative to exclusion. HHS-OIG is responsible for negotiating such agreements—which it typically does at the same time the Department of Justice (DOJ) is negotiating a legal settlement to resolve related allegations—and then monitoring the entities' compliance with them.

GAO was asked to review HHS-OIG's use of these agreements. This report describes (1) the number of agreements and their general characteristics; (2) the circumstances that may lead to an agreement and the standard provisions of agreements; and (3) monitoring efforts and actions taken, if any, in response to noncompliance with the agreements.

GAO examined agreements entered into from July 2005 (when HHS-OIG created its database) through July 2017 (most current at the time of GAO's analyses) and used HHS-OIG data to describe agreements' characteristics and actions to address noncompliance. GAO reviewed HHS-OIG documentation, including agreement templates and a selection of agreements to identify standard provisions. GAO also interviewed HHS-OIG and DOJ officials.

GAO provided a draft of this report to HHS and DOJ. The agencies provided technical comments, which were incorporated as appropriate.