Entities facing lawsuits for infringing a certain type of patent (e.g., for online shopping) can challenge the validity of that patent through a U.S. Patent and Trademark Office program for a fraction of the time and money that would be spent in federal courts.

Under the program, the Patent Trial and Appeal Board decides whether these patents are valid. We recommended that the Patent Office develop guidance for reviewing these decisions to ensure consistency.

The program is set to expire in September 2020—but stakeholders say that it has reduced lawsuits, and that aspects of the program should be included in other Patent Office programs. 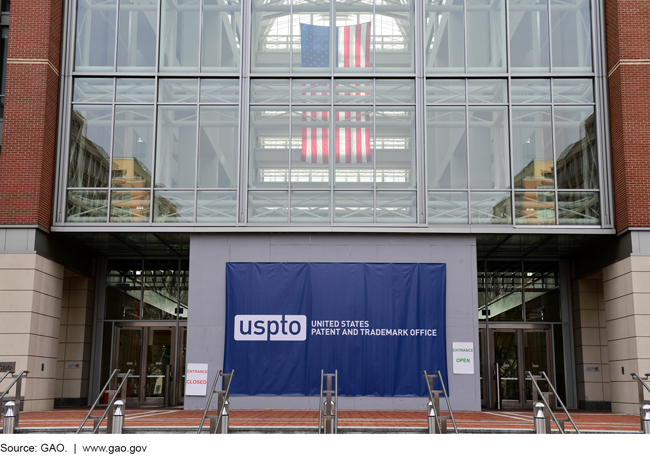 Photo of the US Patent and Trademark Office.

From September 2012 through September 2017, entities facing patent infringement lawsuits filed 524 petitions challenging the validity of 359 patents under the U.S. Patent and Trademark Office's (USPTO) covered business method (CBM) program, resulting in decisions against about one-third of these patents. The CBM program provides entities facing infringement lawsuits an opportunity to challenge the validity of a business method patent by demonstrating that it did not meet requirements for patentability. Business method patents focus on ways of doing business in areas such as banking or e-commerce. The rate of filing petitions over this period has fluctuated but has generally declined since 2015, and none were filed in August or September 2017.

Number of Petitions Filed per Month Challenging Business Method Patents at the U.S. Patent and Trademark Office, September 2012 through September 2017

USPTO has taken several steps to ensure the timeliness of trial decisions, review past decisions, and engage with stakeholders to improve proceedings under the program:

Timeliness: USPTO regularly informs relevant parties about paperwork requirements and due dates throughout trials. According to program data, as of September 2017, all 181 completed trials were completed within statutorily required time frames.

Decision review: USPTO has taken several steps to review its decisions and has monitored the rate at which the Court of Appeals for the Federal Circuit affirms or reverses them. However, USPTO does not have guidance, such as documented procedures, for reviewing trial decisions, or the processes leading to decisions, for consistency. Without guidance, such as documented procedures, USPTO cannot fully ensure that it is meeting its objective of ensuring consistency of decisions.

Stakeholder engagement: USPTO judges have engaged with stakeholders by participating in public roundtables and webinars, and attending judicial conferences, among other things.

Stakeholders GAO interviewed generally agreed that the CBM program has reduced lawsuits involving business method patents in the federal courts. While many stakeholders favored maintaining aspects of the program, there was not strong consensus among stakeholders for how future trials should be designed.

Patents can promote innovation by giving inventors exclusive rights to their inventions, and patent owners can bring infringement lawsuits against anyone who uses, makes, sells, offers to sell, or imports a patented invention without authorization. As GAO previously reported, such lawsuits can take years and cost several million dollars. USPTO's CBM program provides a trial proceeding to challenge a patent's validity at USPTO's board for, according to stakeholders, a fraction of the time and money that would be spent in the federal courts. The CBM program began in September 2012 and is slated to sunset in September 2020.

GAO was asked to examine the CBM program. This report (1) describes the extent to which the program has been used to challenge patents, and the results of those challenges; (2) examines the extent to which USPTO ensures timeliness of trial decisions, reviews decisions for consistency, and engages with stakeholders to improve proceedings for the program; and (3) discusses stakeholder views on the effects of the program and whether it should be extended past its sunset date. GAO analyzed CBM trial data from September 2012 through September 2017, reviewed USPTO documents, and interviewed 38 stakeholders, such as legal and academic commentators, selected for their knowledge of or direct involvement in such trials.