The rising opioid epidemic has contributed to an increase in the number of babies born with neonatal abstinence syndrome—a withdrawal condition with symptoms including excessive crying and difficulty breathing.

The Department of Health and Human Services identified key recommendations to help guide its efforts to prevent and treat this syndrome—such as providing medical education to healthcare providers on how to treat these infants. However, we found that it is unclear how the department will implement these recommendations, if at all.

We recommended that HHS develop a plan to implement these recommendations.

Some infants may receive treatment in a neonatal withdrawal center equipped with a rocking chair to encourage mothers to visit and provide care as well. 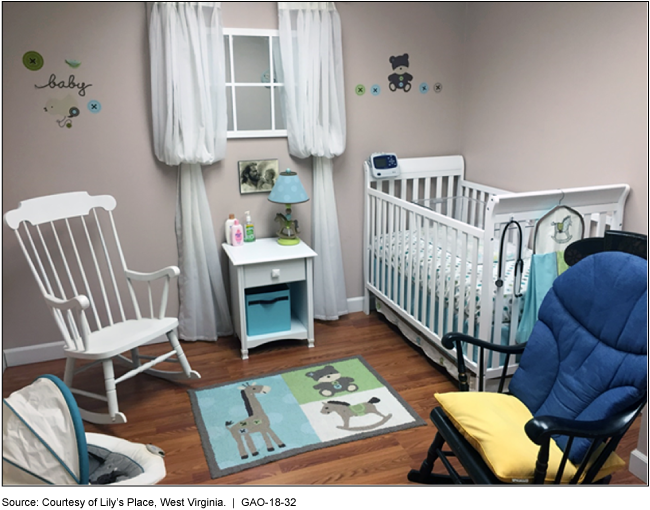 Photo of a nursery room with a crib and rocking chairs.

The prenatal use of opioids or other drugs can produce a withdrawal condition in newborns known as neonatal abstinence syndrome (NAS). Health care providers, state officials, and other stakeholders told GAO that most infants with NAS are treated in the hospital—such as in a neonatal intensive care unit—though some may be referred to a non-hospital setting—such as a neonatal withdrawal center with nursery rooms—to complete their treatment. The table below provides more information on settings for treating infants with NAS and on how Medicaid pays for services in these settings.

According to stakeholders GAO interviewed and literature reviewed, there are several recommended practices and challenges associated with addressing NAS. The most frequently recommended practices included prioritizing non-pharmacologic treatment to infants—treatment that does not involve medications—such as allowing the mother to reside with the infant during treatment; educating mothers and health care providers on treatment of NAS, among other things; and using a protocol in the hospital or non-hospital setting for screening and treating infants with NAS. The most frequently cited challenges included the maternal use of multiple drugs—or polysubstance use—as it can exacerbate NAS symptoms; stigma faced by pregnant women who use opioids; hospital staff burden and limited physical capacity to care for infants with NAS; limited coordination of care for mothers and infants with NAS; and gaps in research and data on NAS, such as research on the long-term effects of the condition.

In May 2017, the Department of Health and Human Services (HHS) published a strategy document that makes key recommendations to address NAS. The Strategy recommends, for example, that health care providers receive continuing education on managing and treating infants with NAS and promote non-pharmacologic treatment. According to HHS officials, these recommendations will inform planning and policy across the department. However, HHS has yet to determine how and when the recommendations will be implemented, including establishing priorities; the roles and responsibilities of other federal, state, and public stakeholders; implementation timeframes; and methods for assessing progress. HHS officials told GAO that they expect to develop an implementation plan sometime in 2017 but had no timeline for doing so. Without a plan that clearly specifies how HHS will implement the Strategy and assess its progress, the department increases the risk that its recommendations for addressing NAS will not be implemented.

As the opioid crisis has increased in recent years, so has the number of pregnant women who use opioids, which can result in NAS. A recent peer-reviewed study found that cases of NAS have grown nearly five-fold between 2000 and 2012 and that most infants with NAS are covered under Medicaid.

The Comprehensive Addiction and Recovery Act of 2016 includes a provision for GAO to examine NAS in the United States and related treatment services covered under Medicaid. This report 1) describes the hospital and non-hospital settings for treating infants with NAS and how Medicaid pays for services, 2) describes recommended practices and challenges for addressing NAS, and 3) examines HHS's strategy for addressing NAS.